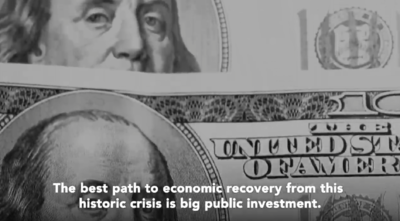 ProsperUS seeks massive government spending. They describe themselves as "a coalition of movement groups, labor organizations, think tanks, experts, and advocates that believes government should invest in people."[1]

ProsperUS is a coalition of movement groups, labor organizations, think tanks, experts, and advocates. Each partner organization has a unique focus and role to play in shaping the future—some focus on federal policy, some work in states and localities; some organize frontline communities, some bring together economists; some run campaigns, some conduct data analysis and research, and some work toward narrative change.

We are united in our belief that the government should prioritize people’s needs—an idea that is economically sound and broadly popular.

We all know that large scale, long term investments are the only way to achieve our collective goals, build more successful and powerful movements for justice, act on climate, and defeat inequality, racism, sexism, ableism, xenophobia, and other injustices.

We’re committed to defeating the lies that uphold an unequal, unjust status quo and advancing the truth: we are the economy and when we do better, the economy is stronger and more sustainable.

We’re here to say policymakers must take bold action, because the real danger is going too small and ending aid too soon.

As ProsperUS, we’re coming together to ensure government at all levels hear the demands of the people, meet the historic nature of the crises we face with bold ideas, and fearlessly commit the public resources needed to implement them.

"Washington, DC (November 19, 2021) – Today, Claire Guzdar, spokesperson for ProsperUS, released the following statement after the passage in the House of Representatives of the Build Back Better legislation. The bill now heads to the Senate where debate is expected to begin in the coming weeks.

“This is a big day for workers, families, caregivers, and communities across the country who just moved one step closer to seeing the benefits of strong public investments that will improve their lives, expand economic opportunities, and build a healthy, thriving economy for all of us.”

“We call on Senate Democrats to take up this legislation without delay and reject any attempts to whittle down the critical investments needed for a just and equitable future.”

“When Pres. Biden signs the bipartisan infrastructure bill into law, our country will move closer to challenging decades of failed economic policies that have benefited the rich and powerful at the expense of everybody else.

“But this is only a partial victory. Congress must pass and the President must sign the Build Back Better Act, which will deliver historic investments to deeply neglected sectors of our economy, from climate resilience to jobs, health care, and child care. Together, the Bipartisan Infrastructure Bill and the Build Back Better Act will set us on the path to a healthier, more prosperous economy that works for all of us.

“Workers, families, and communities cannot afford any further delays. As soon as the House passes the Build Back Better legislation, the Senate should move quickly to send it to the President’s desk for his signature.”

"Washington, DC – Today, ProsperUS coalition spokesperson Claire Guzdar released the following statement on the news that President Biden has released a framework that would allow the bipartisan infrastructure bill and reconciliation bills to be considered and passed in the coming weeks:

“We have been calling on elected officials to reject failed trickle-down economics and pursue an economic agenda that demonstrates that investments in workers, families, and communities, not the wealthy and corporations, are key to widespread prosperity and economic growth. Today’s Build Back Better framework brings us closer to that goal.

“By prioritizing people’s needs and laying the foundation for strong, large-scale public investments, this framework protects our fragile economic recovery and begins to reorient our economy to achieve our collective goals, including building more successful and powerful movements for justice, acting on climate, and defeating inequality and other injustices.

“But we won’t turn the page on 40 years of Reaganomics with one piece of legislation. We join the legions of progressives and activists in calling for not only the critical investments that a handful of members of Congress slashed from this compromise framework, but also in urging the administration to pursue every possible avenue, including executive action, to move us towards a healthy, thriving economy for all.

“Now, Congress must move quickly to pass both the bipartisan infrastructure bill and the Build Back Better framework together to deliver these critical investments to people across the country.”

According to their website, ProsperUS consists of the following partners:[6]