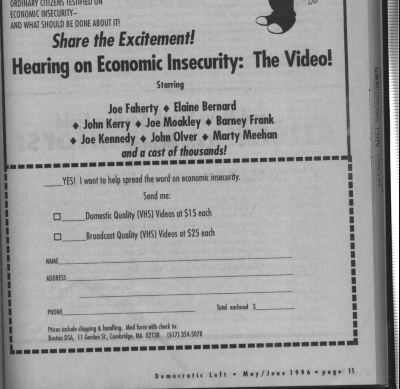 Sam Farr had been a Peace Corps volunteer in Colombia, and was contacted by the communist dominated Colombia Support Network in 1997. Efforts by Colombia Support Network were instrumental in getting a letter sent to Secretary of State Madeleine Albright, with the 19 other members signing on. The January 30, 1998 letter called for the continued suspension of funding to the Colombian military then engaged in a bloody civil war against communist guerillas.

We are writing to express our concern with the worsening human rights situation in Colombia and urge you to take steps to address this matter.

News reports and first-hand accounts indicate that violence in Colombia is escalating, particularly in the country's northern most regions and the southern coca growing regions. Many different groups and individuals have been implicated in the violence, but an increasing number of human rights abuses are being instigated by paramilitary groups --armed civilians who torture, evict, kidnap and murder Colombian civilians.

There is also evidence of links between paramilitaries and local drug lords, who rely on paramilitary groups to undertake violent activities on their behalf. The Peasant Self-Defense Group of Cordoba and Uraba, a paramilitary group lead by Carlos Castano, is considered one of the most powerful paramilitary groups in Colombia. Reports indicate that last yeqar Castano's group killed hundreds, if not more than a thousand, peasants it accused of helping rebels.

As concerned Members of Congress, we urge you to place the issue of human rights and the problem of paramilitary groups in the forefront of your priority list in your dealings with Colombia. We understand that aid to the Colombian army is currently on hold because of human rights concerns and urge you to continue to withhold funding.

2006 letter to Condoleezza Rice on Colombia

Alleged Colombian Army killings prompted Fellowship of Reconciliation to work with Representative Sam Farr to forge a response that would impact the 17th Brigade, the unit allegedly responsible for the violence against San José de Apartadó and communities throughout northwestern Colombia.

As a result, Reps. Sam Farr and Jim McGovern, wrote a letter to their colleagues in Congress urging them to join in calling on Secretary Condoleezza Rice to cut funding for the Colombian military.

We applaud the decision, noted in your certification letter of August 2005, that the US "will not consider providing assistance to the 17th Brigade until all significant human rights allegations involving the unit have been credibly addressed." Because the Brigade is a component of the Colombian Armed Forces' command structure and has been implicated in the above referenced human rights violations, we implore you to abide by both the letter of the law and the spirit of the law by withholding human rights certification for Colombia until the following conditions are met:

Following discussions March 16, 2006 with Sinn Fein President Gerry Adams a number of senior US representatives agreed to lobby the British government to reconvene the Assembly in the short term.

A Sinn Fein spokesperson described all of the meetings as "very positive and constructive. The conversations concentrated on the need to make progress and on our proposals for breaking the logjam. This means movement by the British and Irish government‚s before the summer and well in advance of the marching season.[5]

On Saturday, May 6, 2006, Woman’s Agenda will celebrate its 8th Annual Women & Policy Symposium called Beating a Culture of Violence: “I’m a Survivor.” It will take place at the Lawrence Senior Center, located at 155 Haverhill Street, from 8:30 am to 3:30 pm.

Despite the fact that these symposiums are held only once a year, it has served to influence policy development in the public and private sectors. This year the focus is on attacking violence against women through an intergenerational dialogue in which mature women will be engaged in a discussion with young adolescent and young adult females to develop strategies to prevent women from falling victims of violence and to ensure women already in abusive situations that there are avenues for escape.

The Maria Garcia Liriano Award is presented to one woman each year for outstanding achievements and this year it will go to domestic violence survivor, journalist, writer and poet Beatriz Perez. The Women of Action Awards celebrates the extraordinary efforts of unsung heroines and this year these women are Sandy Almonte, Maria Monica Alvarces, Paula Callanan, Zoila Gomez Diaz, Rebecca A. Hall, Anna Ruth Sullivan, Carolyn Traficanti and Rev. Gladys Tucker. [6]