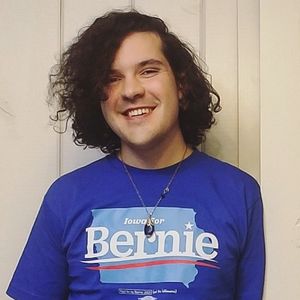 Justin Nemon is a Regional Field Director for Bernie Sanders. 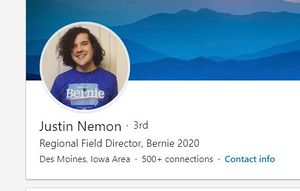 According to his LinkedIn profile, Justin Nemon served as a Field Organizer for Cindy Axne for Congress.

Justin Nemon, a 17 year old rising senior at Asheville High, is Cecil Bothwell's campaign intern. He has been working with us for the last couple months and has assumed the position of Campaign Field Director. Justin is deeply passionate about the issues that matter to the city of Asheville and to Councilman Bothwell, such as equal rights, essential civil liberties, and to a much more sustainable Asheville. This summer, Justin is devoting all of his time and energy advocating for these issues as well as attempting to raise awareness among the youth of our city.

Recently, Justin has been given an opportunity of a lifetime. He has been accepted into two different programs in Washington D.C. The first is the Campus Progress National Summit. Campus Progress is a national organization that works with and for young people to promote progressive solutions to key political and social challenges. The summit was created by coordination between Campus Progress and the Wellstone Organization, and will also host dozens of other progressive organizations from around the country. Previous speakers at this summit have been President Obama, former President Bill Clinton, House Minority Leader Nancy Pelosi, civil rights activist and Congressman John Lewis, and former Senator Russ Feingold. This event will help Justin network with other youth activists and leaders from across the country, have a voice in the debate about the direction of the Democratic Party, and most importantly, he will be able to learn new ideas and strategies to bring back home to Asheville and to the campaign.

The second program is a 2-week Summer Immersion on Campaign Building at George Washington University. This summer course will refine Justin’s political campaign skills and will develop his understanding in campaign mechanics, ethics, and personal requirements of public office. While there, Justin will attend seminars and discussions with political professionals, candidates, and elected officials. This amazing program will allow Justin to develop his campaigning abilities that he would be using once he returns to Asheville.

These opportunities in D.C. will significantly assist Justin in achieving his objectives of aiding Cecil Bothwell in his re-election campaign this year and inspiring the youth of Asheville to wake up and become an active coalition of progressive causes. We believe that this would be a great experience for Justin and urge our supporters to help Justin raise the remaining $1,500 for this trip.

Fellow Bernie Staffers are 'further left than the Democratic Socialists'