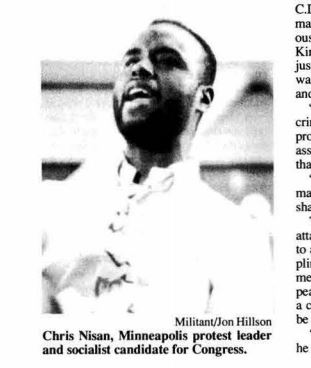 Chris Nisan 1992 via The Militant (Screenshot)

Template:TOCnestleft Chris Nisan is a Minnesota activist. He ran for Congress in 1992 on the Socialist Workers Party in Minnesota, District 5.[1] He later worked as a reporter for the Minneapolis Spokesman newspaper.[2]

An article posted at the Socialist Workers Party publication, The Militant titled "Minneapolis marchers say 'jail the cops'" written by SWP comrade Jon Hillson refers to Chris Nisan as a "central organizer" of "a united protest against the acquittal of the four Los Angeles cops who brutalized Rodney King."[3]

""Who are we?" Chris Nisan, a central organizer of the event and Socialist Workers Party candidate for U.S. Congress (5th C.D.), asked the crowd as they prepared to march. "We are serious people with a serious message. We want justice for Rodney King. But we know we are not doing this just for brother Rodney. The attack on him was an attack on us. We are defending him and we are defending ourselves.

"We want the cops, the racists cops, the criminal cops, the thugs in blue, arrested, prosecuted, and in jail," Nisan said, as the assembly roared approval. "And we want that message to get across.

"We want a disciplined march, a militant march, a peaceful march," he said, as marshals lined up to lead the assembly. Today, he continued, "we are not out to attack anybody and we don't want anybody to attack us. That's what we mean by discipline. We will discipline ourselves to get our message out. That's what we mean by peaceful; we are not going to give anybody a chance to attack: us. And we are going to be militant. Like Mandela, like Malcolm.

"Does militant mean we are not mad?" he asked the crowd.

In the late 1980s Mel Reeves was in Minnesota. He joined Clergy and Laity Concerned and became their racial justice coordinator.

We worked on jobs, housing, supported MN Students Against Apartheid. That is when I met Janice Payne Dorliae. She was a former Black Panther Party member — a real revolutionary. I also befriended Chris Nisan who was a long time activist. Janice would question us. She would tell us what to do. She would have us read and study. She would tell me about her past. She would engage us in political discussions, assign us books and ask what we thought. I’m trying to do that now with younger folks. Study groups. I got that from Janice.

On the first day of the year, 1987, Janice died tragically. Her death was a huge blow for me.

In 1989 there was the Embassy Suites case. Cris Nisan did fabulous work on that case. It was so egregious. Black college students had rented a room. Someone called the police complaining about noise. The police came, with guns drawn and beat up some of the students. Chris convinced them to hold a press conference. He had the presence of mind to move quickly. The cops wound up not being charged.

I started writing for the Spokesmen Recorder. I was editor of and on during the 1990s. Cris Nisan and I started playing the role of social justice firemen. People would call about whatever was going on and we’d show up. We would go into the schools with parents. We even took on landlords. People knew who we were. We would show up and threaten to raise hell, get people to do the right thing. We would go to people’s jobs and support them as they raised hell with their employers. We were a little crazy, a little wild. We wouldn’t take crap from anybody.[4]

Maoist interview with Ellison and Nisan

Chris Nisan, August Nimtz, Keith Ellison and their comrade Yusef Mgeni are mentioned in the Socialist Workers Party (SWP) publication “The Militant” as speaking at various events sponsored by the SWP.[5],[6],[7] 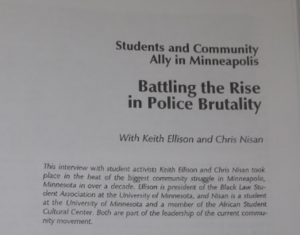 Campus Racism and the Rebirth of Militant Black Student Activism

A politica debate took place in Minneapolis mid 1992 between a leading official of the Nation of Islam and Chris Nisan, Socialist Workers Party candidate for Congress in the Fifth Congressional District.

Distinct and polarized views surfaced on issues as varied as the legacy of Malcolm X, the role of the African National Congress in the South African freedom struggle. and the Nation of Islam's participation in Democratic Party politics.

Dr. Khalid Abdul Muhammad, one of the highest-ranking officials in the Nation of Islam, was invited to speak at the University of Minnesota by the Africana Student Cultural Center. His talk, which lasted almost an hour and a half, was attended by some 800 people from the Twin Cities Black community.

In his speech Muhammad denounced white supremacy, Black "self-hatred," interracial relationships. and homosexuality, among other things. After his talk, Muhammad invited questions from the audience. One of the questioners wanted to know his response to the political analysis of the Nation by supporters of the Socialist Workers Party.

She summarized the socialists' position as being that the Nation of Islam is in the Democratic Party and on the side of the oppressors of Black people, and that under its founder, Elijah Muhammad, it "sold out" the civil rights movement owing to a deal with the Ku Klux Klan.

Muhammad denounced these views and demanded that whoever made such accusations reveal themselves. He repeatedly asked: "Where is the fool?"

SWP candidate Chris Nisan rose to answer Muhammad's challenge and went to the front of the almost packed hall. Nisan explained that he and other young socialists had criticized the Nation's participation in the Democratic Party. This included the fact that a couple of years ago the organization ran candidates in the Democratic Party primaries in Prince George's County, Maryland.[10]

Chris Nisan was a leader of the Young Socialist Alliance.[11]