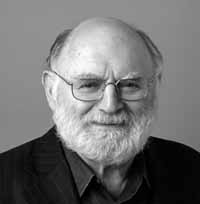 Victor Saul Navasky (July 5, 1932) is a professor in Columbia University's journalism school. He served first as a fellow at the Institute of Politics at Harvard's Kennedy School of Government and then as a senior fellow at the Freedom Forum Media Studies Center at Columbia University while on a year's leave of absence from The Nation. He is currently a Publisher emeritus with the magazine.

Before The Nation he was an editor at TheNew York TimesMagazine and wrote a monthly column about the publishing business ("In Cold Print") for theNew York TimesBook Review. Navasky is the author of Kennedy Justice (Atheneum, 1977), the American Book Award winner Naming Names and, most recently, A Matter of Opinion. He is co-author with Christopher Cerf of The Experts Speak: The Definitive Compendium of Authoritative Misinformation, now in its second edition.

Navasky has also served as a Guggenheim Fellow, a visiting scholar at the Russell Sage Foundation and Ferris Visiting Professor of Journalism at Princeton. He has taught at a number of colleges and universities and has contributed articles and reviews to numerous magazines and journals of opinion. He is a graduate of Yale Law School (1959) and Swarthmore College (1954), where he was Phi Beta Kappa with high honors in the social sciences.

Navasky is also director of the George Delacorte Delacorte Center for Magazine Journalism at Columbia University and a regular commentator on the public radio program Marketplace.

Navasky has three children and lives in New York City with his wife, Anne. He serves on the boards of the Authors Guild, PEN and the Committee to Protect Journalists.[1]

Letter to Judge Thapar asking for leniency for the Oakridge 3

Victor Navasky signed a letter dated January 9 2014 asking for leniency for the "Oakridge 3":[2]

Dear Judge Thapur: The Defending Dissent Foundation is a 53 year old civil liberties organization that recognizes the value of dissent in a vibrant democracy. As such, we regard the actions of Sister Megan Rice, Greg Boertje-Obed and Michael Walli on July 28, 2012 as nonviolent civil disobedience in the finest American tradition. Therefore, we respectfully request that you exercise your right to judicial discretion in sentencing these three individuals. The Defending Dissent Foundation takes no position on nuclear weapons facilities or the content of the protest, but it is clear that the three sought to call attention to an issue of national importance and, through symbolic action, voice their concern and opposition. Their goal never was to harm anyone, and no one was harmed. The fact that the three were able to find their way into the facility and reach the uranium storage unit reflects the abysmal security system of the facility. These activists should not be held liable for the closure of the plant for two weeks to address security lapses. It should not be a factor in their sentencing. Non-violent civil resistance and civil disobedience have long played an important role in our democracy, bringing important issues to the public sphere and advancing our society toward justice, freedom and peace. Like others who have undertaken such action, Sister Megan Rice, Greg Boertje-Obed and Michael Walli are willing to serve time in jail, which they have done without complaint. However, to sentence the three to terms of up to twelve years would be an injustice. In your October 1, 2013 Memorandum Opinion and Order you wrote, “Of course, the defendants’ non-violence will be relevant at sentencing, since the Court must account for both the “nature and circumstances of the offense and the history and characteristics” of the defendants… Given the obvious differences between the defendants and the paradigmatic saboteur, those factors surely will be worthy of discussion”. We applaud your wisdom and insight and strongly encourage you to sentence the three with downward departures from the sentencing guidelines.

Every year since the mid 1960s the Indiana based Eugene V. Debs Foundation holds Eugene Debs Award Banquet in Terre Haute, to honor an approved social or labor activist. The 1996 honoree, was Victor Navasky.[3]

As of Oct 3 2009 Victor Navasky was listed as a Board Member of Defending Dissent.[4]