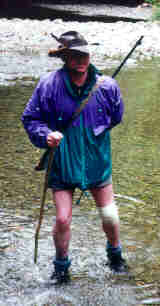 Sam Murray, earned a PhD in 2001 (Anthropology) from Massey University.

Circa 2000? of late I have spread my creative wings somewhat and have been doing a little (emphasis on little) bit of acting. "Stickmen" (a really cool New Zealand film) and "Lord Of The Rings" are two of the projects I have worked on in the last year. In one I appear as a kind of hairy Thunderbird puppet and the other I play a variety of characters, none of which (if any) is immediately recognisable as myself. Still it was fun while it lasted :-)

In September 2002 there was article in Red Flag by Michael "Spike" Thomas of the Gordon Watson Branch of the Socialist Party of Aotearoa.

In February 2004, Thomas wrote an article in Red Flag on boycotts.

In 2004, Thomas was a computer consultant, 138 the Ridgway Mornington.