In 2015 Gary Broderick was political director of Progressive Philly Rising.

On Saturday, the group joined several other activist groups from across Philadelphia for an event at the Arch Street Methodist Church in Center City, where the Point Breeze Organizing Committee officially endorsed Hanger’s campaign.

The event was sponsored by Progressive Philly Rising, a new coalition of social justice groups like PBOC that are “committed to putting front and center [the issues of] public education and economic inequality,” Dina Yarmus, a member of PPR and the emcee at the event, said. The event included speakers from many of the organizations in the coalition and prominent activists, including retired teacher and education activist Ron Whitehorne and labor activist Bill Fletcher, Jr. The Media Mobilizing Project presented a video of the progress made by working people across the city throughout the past year. The event closed with PBOC’s endorsement of Hanger, and Hanger accepted the endorsement in his keynote speech.[1] 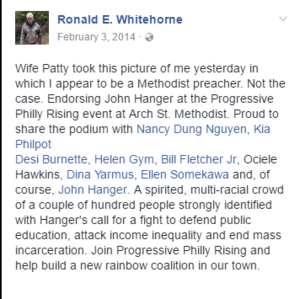 Wife Patty took this picture of me yesterday in which I appear to be a Methodist preacher. Not the case. Endorsing John Hanger at the Progressive Philly Rising event at Arch St. Methodist. Proud to share the podium with Nancy Dung Nguyen, Kia Philpot Hinton, Desi Burnette, Helen Gym, Bill Fletcher, Jr., Ociele Hawkins, Dina Yarmus, Ellen Somekawa and, of course, John Hanger. A spirited, multi-racial crowd of a couple of hundred people strongly identified with Hanger's call for a fight to defend public education, attack income inequality and end mass incarceration. Join Progressive Philly Rising and help build a new rainbow coalition in our town.

When Hannah Jones - Maypop Collective was first approached about joining a newly-emerging progressive coalition in Philadelphia that was backing John Hanger for governor, she was conflicted. So when Progressive Philly Rising approached the Maypop Collective for support, "I moved past my initial hesitation and listened". They presented a long-term vision for progressive and working class power in Philadelphia that inspired and excited us in Maypop. We talked and thought and paced and questioned. We worked through the ways in which the fight for ecological justice in Philadelphia is inextricably linked with the fight for economic and racial justice. After much deliberation, we decided to join the coalition.

On February 1st, 2014, over 250 people gathered at Arch Street United Methodist Church for PPR’s first public event to hear about its vision. The event featured a host of community organizers from Philadelphia, including Nancy Dung Nguyen with Boat People SOS, Kia Philpot Hinton Hinton Hinton with Action United, Mohammad Shukur with the Unified Taxi Worker Alliance, Desi Burnette, an organizer for migrant justice, and others.

Members of the Point Breeze Organizing Committee (PBOC) opened the program by calling on the audience to imagine what it could look like for progressive forces in Philly to build power and WIN. Multiple speakers affirmed that we CAN overcome corporations and their mounds of cash. We heard members of PBOC talk about challenging a powerful developer from controlling parts of the Point Breeze neighborhood. And they won. We heard about hotel workers overcoming corporate intimidation and winning on a union contract.

Each person spoke to the interconnected nature of the struggles represented in the room. As Helen Gym with Asian Americans United and Parents United said, “We have to recognize that the very same interests that regard education as a business, schools as centers of potential profit, parents as consumers, and teachers unions as obstacles to corporate control, will approach every arena of life with the same exploitative zeal.”

Nancy Dung Nguyen said : “I know that we in this room envision a city with strong public schools…where our jobs allow us to live dignified lives…A city with increased civic participation from all our marginalized folks – immigrants, young people, progressives, LGBTQ folks, African-Americans. I envision a city where we are all leading.”

The speakers at the event had no delusions that an elected savior could solve all our problems. Nancy, again, sums it up nicely: “We know that our work doesn’t stop now…We know that these are particular important milestones that we need to win as we grow in our work and develop ourselves.”

Meanwhile, Progressive Philly Rising is proactively demanding a progressive agenda and backing a candidate who is adopting it. To name a few examples, John Hanger has truly progressive stances on mass incarceration, public education, and deportation. These issues can be the difference between life and death for working class communities and communities of color in the city.

Maypop is committed to the work of Progressive Philly Rising because we believe that a “Just Transition” means that as we fight the fossil fuel industry, communities are also building power. We want to support communities that are building power to have control over their own housing, education, food, water, and energy. We see backing John Hanger’s People’s Campaign as one step in a long struggle for progressive political power and justice.[2]