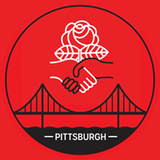 David Schlitt, Daniel Moraff and Dan Hanson were listed as contacts for Pittsburgh Democratic Socialists of America Organizing Committee in 2016.[1] 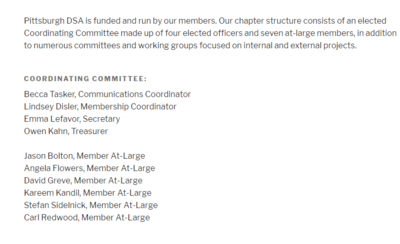 Pittsburgh DSA is funded and run by our members. Our chapter structure consists of an elected Coordinating Committee made up of four elected officers and seven at-large members, in addition to numerous committees and working groups focused on internal and external projects. 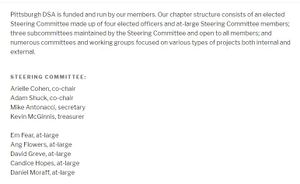 The Pittsburgh Democratic Socialists of America have chosen two candidates to endorse for the 2018 election cycle. 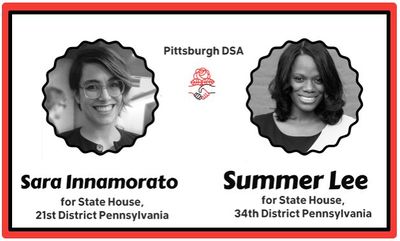 Summer Lee is running for Pennsylvania’s 34th Legislative District and Sara Innamorato is up for District 21. Both Lee and Innamorato were endorsed by Pittsburgh DSA, both identify as democratic socialists, and both are dues-paying members of the DSA.

Summer Lee is a graduate of Howard University School of Law and has been an organizer in the Woodland Hills School District area. She is a vocal opponent of armed police presence in schools and currently serves on the Woodland Hills Commission on Youth Development and Learning. She has advocated tirelessly for area juvenile and criminal justice reform, education funding, workers' rights, and creating decent jobs that pay a living wage.

Sara Innamorato is a graduate of Coro Pittsburgh's Center for Civic Leadership's Women in Leadership Program, and co-founder of She Runs, a nonprofit to encourage and empower women to run for government office. She is devoted to pursing healthcare for all, housing as a human right, and reforming Pennsylvania politics.[4]

On May 15, 2018, two members of Pittsburgh DSA running with our endorsement, Summer Lee and Sara Innamorato, won their bids to receive the Democratic nomination to the Pennsylvania House of Representatives. They received an overwhelming share of the votes, at 68% (Lee) and 64% (Innamorato), against conservative Democratic incumbents who were previously thought to be unbeatable. Because Lee and Innamorato both ran in overwhelmingly Democratic districts, and because they won the nomination resoundingly, we believe them to be as good as elected to the state House.

A third member endorsed by Pittsburgh DSA, Kareem Kandil, finished third in a closely split three-way race for the nomination in a wealthier and more conservative suburban district; his 2 5.5% of the vote, while less than needed to receive the nomination, was also a tremendous achievement in a district that has few DSA members and received far fewer resources than Lee’s or Innamorato’s districts. Kandil, a founding member of the current Pittsburgh DSA chapter, generated strong enthusiasm among our members for future runs for office.

Lee is an attorney from an African American working class community who ran on a platform of raising the minimum wage, bringing an end to the school to prison pipeline, and aggressively fighting air pollution and fracking. Innamorato has been a public relations specialist for non-profits promoting food access, women’s rights, and social justice, and centered her campaign on single-payer healthcare, progressive taxation, and housing as a human right. Kandil, a health care policy specialist and co-founder of the local DSA chapter, also ran on single payer and anti-fracking policies. Full candidate bios are at the bottom of this piece.

Over the course of a year and a half, Pittsburgh DSA has grown to over 550 committed activists. While our recent electoral success required serious coalition building with other organizations, including Planned Parenthood of Western Pennsylvania, Clean Water Action, the Sierra Club, and others, we are currently well-positioned to recruit more candidates running on socialist values and policies. We offered our candidates their first base from which to grow their support. Our role as an organization is to identify capable candidates with a winnable plan, and to provide them with the skills and resources to get organized. Our candidates in this cycle included people who were already members of the DSA and candidates who spoke out as socialists regardless and were therefore recruitable to our organization. All three candidates ran openly as socialists—we supported no “compromise” or lesser-evil candidacies.

Overall, our members represented at least 15 percent, but probably closer to 25-30 percent, of the more than sixty thousand doors knocked by the three campaigns. (The 15 percent number comes from canvassing we specifically organized, and from walk sheets that specifically had “DSA” written on them when they were turned in. However, we know that dozens of shifts were taken by DSA members outside of our specifically scheduled canvasses and without being recorded as “DSA” by the campaigns.)

DSA members were the campaign managers and key staff of both Lee’s and Innamorato’s campaigns, and DSA members provided most of the data entry and precinct walk mapping that allowed the campaigns to track the work of so many volunteers. In the end, Pittsburgh DSA PAC has retained the data from the DSA portions of the campaign work, and we will use it to reach out and continue to build our membership and elect additional candidates for years to come.

Possibly the most dramatic effect of our work, besides electing our two candidates, was voter turnout. In both Lee’s and Innamorato’s districts, voter turnout in 2014 was 18%. This year it ballooned to 30%, while other nearby districts showed no similar increase. We demonstrated something that advocates of grassroots politics have always known—turnout and participation are the results of active campaigning.

We are now focused on recruiting candidates for the substantial number of winnable local races coming up in 2019. Our areas of greatest interest are district attorney of Allegheny County, several Pittsburgh city council and school board districts, and the host of municipal races in small jurisdictions throughout the county where struggling populations are increasingly receptive to a socialist message. We are discovering that when we spend the time talking to people, it’s clear that their values and our values are closely aligned. We believe that all of Allegheny County, and perhaps even all of Western Pennsylvania more broadly, is open to DSA’s message and DSA organizing. By Kenny Mostern is the Treasurer of Pittsburgh Democratic Socialists of America PAC [5] 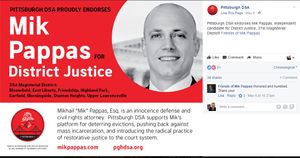 Mik Pappas was endorsed by Pittsburgh Democratic Socialists of America, in his 2017 District Justice run.

After speaking with him, Rep. Doyle stated that he intends to co-sponsor HR 4391, a bill that prevents US aid from going to the Israeli military detention of Palestinian children. 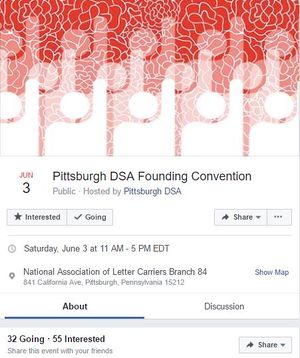 Electing officers (two co-chairs, a secretary, and a treasurer) 🎉 Electing delegate to the national DSA convention 🎉 Voting on and adopting chapter bylaws[6] 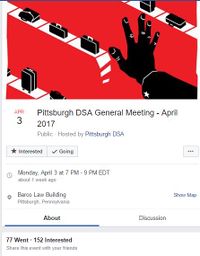 At this meeting, we will: