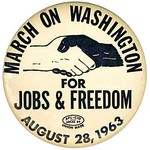 Template:TOCnestleft The March on Washington for Jobs and Freedom took place on August 28, 1963. It culminated in a gathering at the Lincoln Memorial in Washington D.C. 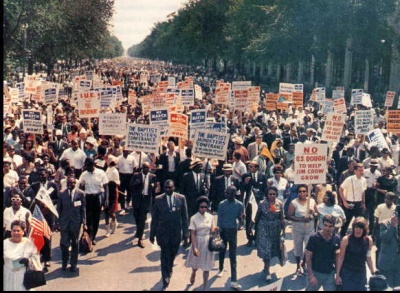 According to Boston Democratic Socialists of America publication Yankee Radical, September/October 2010 page 3, the Socialist Party USA played a major role in organizing Martin Luther King, Jr.'s famous 1963 March On Washington for Jobs and Freedom. According to Boston DSA several Socialist party members played key roles in organizing the march, including A. Philip Randolph, Bayard Rustin, Tom Kahn, Rachelle Horowitz and Norm Hill. King himself was in the Socialist Party in Boston during his student days in the early 1950s, according then Socialist Party member, now DSAer Bogdan Denitch.[2]

If anything, one aspect of the 1963 rally, deliberately down-played at the time for fear of red-baiting, was the influence of members of the Socialist Party, DSA’s major predecessor organization, in both organizing the event and its politics. This began with A. Philip Randolph, who issued the call for the March and MC’d it, his longtime lieutenant Bayard Rustin, and his key assistants who ran the March organizing office in NY—Tom Kahn, Rachelle Horowitz, Norm Hill and others, SPers all. (According to Honorary DSA Chair Bogdan Denitch, who was in a position to know, Matin Luther King himself was briefly in the Socialist Party in the early 1950s while attending Boston University.)

On May 7 1994, the New York Communist Party held a fundraising banquet to honor three Party activists Ted Bassett, Rose Kryzak and Mary Gale. Grace Bassett accepted the award on behalf of Ted Bassett. Almost 3,000 was contributed in honor of the three.

In 1963, Liz Elkind was a volunteer at the March on Washington's headquarters in Harlem. Under the leadership and direction of Bayard Rustin and his lieutenants, she and others stuffed envelopes, answered phones, provided information, and organized transport to Washington.

On the eve of the march, Elkind's task, with others, was to load people onto the fleet of buses leaving from the office and ensure that everyone who wanted to go got a seat on a bus. The last bus left close to midnight, and there was no seat left for Elkind. In the morning, she went out to La Guardia Airport and jumped on a shuttle to Washington. As the plane flew low over Washington I looked out the window and her heart sank. She couldn't see any people on the ground. Would the promised numbers not materialize? Then she suddenly realized that what she was seeing was not the ground but the masses of people; so many people that the streets below were completely covered. [4]