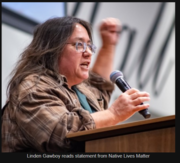 Linden Gawboy is the wife of Mick Kelly. She is a member of the Freedom Road Socialist Organization/FightBack!. 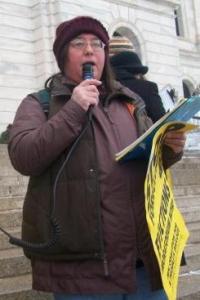 On Sept. 4, 2008, Linden Gawboy, Welfare Rights Committee was one of hundreds of anti-war protesters who marched on the Republican national convention Thursday hoping to confront John McCain as he accepted his party's nomination for the presidency. Gawboy stated, "We want to go to the Xcel (Energy) Center to send a clear message to John McCain".[2]

Circa September 19, 2009, Linden Gawboy signed a petition initiated by the Minnesota Coalition for a People’s Bailout entitled, Petition to Demand a People's Bailout which includes the statement, "Tax the rich, make them pay for their crisis!"[3] Gawboy is also a leader of the organization.

On September 24 the F.B.I. raided the homes of twelve leftist activists across the U.S.A. looking for links to foreign terrorist organizations. Gawboy was one of those whose home was raided by the FBI. 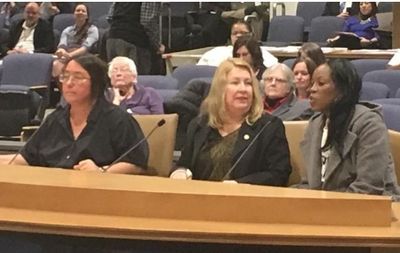 According to Linden Gawboy, a Minnesota state senate committee, on Feb. 27, 2017, acted favorably on a bill that expands welfare to people who, under current law, don’t qualify for any cash assistance. The Welfare Rights Committee (WRC) created the bill to Give Aid to All in Need - the GAAIN bill.

GAAIN calls for expanding state-funded General Assistance to people who have no income. This includes people who are unemployed and looking for work and families who have been cut off because of the five-year limit on welfare.

The Welfare Rights Committee has spent the last two months getting sponsors in the state house and senate and getting the bill introduced - it is House File 357 and Senate File 791. The chief authors are Representative Susan Allen and Senator Chris Eaton. The Feb. 27 hearing was in the Senate Human Services Reform Finance and Policy committee, which moved the GAAIN along for possible inclusion in the human services finance bill.

A statement from the Welfare Rights Committee noted, “In greater Minnesota, the seasonal and/or boom-and-bust economy leaves many people with nothing during hard times. If we are renters, we risk losing our housing by taking in destitute family members and friends. Small towns and poor neighborhoods will directly benefit from the GAAIN bill, as residents give back to the local economy.

“There is a reason that Trump won. Regular working and poor people have been feeling ripped off and ignored for a long time, by both parties. But we know that Trump, and the billionaires he speaks for, are bad for all of us. So let’s turn this ship around. Tell politicians to do something that will really help the people in need.”[4]