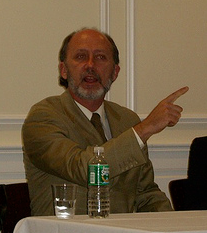 In 2000[1]Marzilla worked on the Working Family Agenda.

In 1983 Jim Marzilli was a Boston, Massachusetts delegate to the Democratic Socialists of America conference in New York City, October 14-16, 1983[2]

In 1995,Boston DSA heard DSA National Director Alan Charney at an August "retreat and radical Bar-B-Q" at the home of Democratic State Representative Jim Marzilli in Arlington. Charney worked with local leaders to develop a strategic plan for the local's work. . [3]

Representative Jim Marzilli is one of the strongest progressive voices in the Massachusetts Legislature, and a former leader and Chair of Boston DSA in the 80s. He has been a leader on environmental, election reform, education and countless other issues. Jim is facing opposition from Libertarian candidate Daniel Dunn.

With "a little help from Mass Alliance", 17 year State Rep (and former Boston DSA Chair) Jim Marzilli won a four-way “Special Election” primary in November 2007, to fill a vacant State Senate seat in the 4th Middlesex District, then went on to defeat two other candidates in the December 11 final. Being the only primary candidate to oppose Governor Patrick’s casino plans cost marzilli some labor support, but his strong showing in Arlington pulled him through. "DSA sent out a postcard mailing to our members in the district pointing out some of his outstanding work in the legislature". [8]

On 8 April 2008, Marzilli was accused of sexually assaulting a woman in Arlington, Massachusetts.[9]