Jason Anderson-Utley Crow (born March 15, 1979) is a member of the United States House of Representatives for Colorado's 6th congressional district.

Between 1,000 and 2,000 protesters gathered outside of the immigrant detention center in Aurora on the evening of July 12 2019, by far the largest protest outside of the facility in recent memory, according to activists.

"I think the most people we've had at a protest until last Friday was maybe a couple hundred people," says Jennifer Piper with the American Friends Service Committee.

But after a group of protesters took down the American flag over the GEO Group facility and replaced it with a Mexican flag, what could have been a moment of unity among pro-immigrant activists turned sour. Activists are now trying to figure out what, exactly, went wrong.

The demonstration included two groups: those who were participating in the Lights for Liberty vigil, which had similar iterations in over 600 locations across the world, and those who participated in the March to Close the Concentration Camps, most of whom eventually joined the Lights for Liberty vigil after they finished marching around the facility. The march was organized by groups including the Green Party of Colorado, the Denver Communists, the Boulder Democratic Socialists of America, and the Coalition to Close the Concentration Camps, among other entities.

"A couple of nights before the event, we met with them," says Dana Miller, one of the organizers of the Lights for Liberty demonstration, about coordinating with the groups that were marching before the vigil. "The terminology that was used was that they would respect our vigil. The question is: What does respect actually mean, or what did it mean in that room? And also, the people in that room, I don't know if those were the people that actually stormed that GEO center. I don't know. I can't say if the storming of the GEO center was directly due to the organizers of the other march or if it was spontaneous."

A member of the Boulder Democratic Socialists of America who attended the protest but was not involved in planning says that the decision to enter GEO property was spontaneous. "One of the guys who had been marching with us, I don't think he had been affiliated with any group, he had this big Mexican flag, and he crossed the barrier and was running around the ICE parking lot waving it. Everyone seemed pretty stoked about it," says the individual, who asked to remain anonymous because the Aurora Police Department is offering $4,000 for help in identifying people involved in the flag incident.

Frankie Donez, an organizer of the March to Close the Concentration Camps, says that he knows the flag-carrying man, who is, in fact, Mexican. "He was one of the people most affected by this issue," Donez says. "I think that they were practicing peaceful civil disobedience in an appropriate manner to express their discontent with concentration camps."

Democratic politicians involved in the protest also condemned the flag incident. "We want to make it very clear that we strongly condemn the desecration of the American flag. Each of us has deep roots to the military and honor those who serve," said Aurora City Councilwomen Allison Hiltz, Nicole Johnston and Crystal Murillo in a joint statement. "We also are committed to speaking up against human rights abuses, even when a small group tries to distract from the issue."

Congressman Jason Crow, whose district includes Aurora and who has been pushing for more oversight of the GEO facility, wasn't at the protest but did send a staff member. "I condemn the desecration of the American flag. I fought to defend our flag and the values it represents," Crow said in a statement. "To deny the dignity and decency of people in detention is an affront to those values. I support the peaceful protesters who were there to raise awareness of conditions at immigration detention centers and thank the Aurora police for their professionalism at the event."

The flag incident is also fueling tension between organizers of the march and the vigil.

"We unequivocally denounce the actions of rogue protesters who stormed the for-profit detention camp and replaced the American flag with the Mexican flag yesterday. These protesters put the undocumented families who were attending a peaceful vigil at the same location in danger of being arrested and caused harm to the immigrant rights movement," Cristian Solano-Cordova, communications manager for the Colorado Immigrant Rights Coalition, wrote in a statement. CIRC helped organize the Lights for Liberty protest.

Jeanette Vizguerra, an immigration-rights activist living in sanctuary in a church in Capitol Hill, wants everybody who was involved in the protest to move on. "We're calling for unity. We welcome any ally, any person that wants to join the movement.[2] 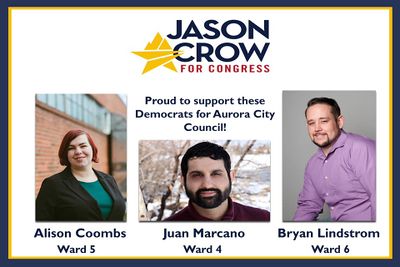 Many elected Democrats came out in favor of Juan Marcano who ran on his immigrant roots, including Attorney General Phil Weiser, 6th Congressional District Rep. Jason Crow, Arapahoe County Commissioners Nancy Jackson and Bill Holen and State Rep Rep. Mike Weissman. He also received the endorsements of organizations such as Working Families Party, Run For Something and Colorado People’s Action, all of which recruit and support young progressives to help build their political careers and advance the socialist movement.[3]

Never thought I would see a day where members of Congress would be saying it’s #TayTime! I’m so enthused to have these people on our team.

Tay Anderson was endorsed in his Denver School Board run by Congressmembers Joe Neguse, Jason Crow and Diana DeGette.

Support from Onward Together

Onward Together supported Jason Crow as a candidate for the 2018 midterm elections.[4]

Jason Crow was endorsed by 21st Century Democrats in 2020.

According to Lizeth Chacon:

Last year, community organizing group Colorado People’s Action (CPA), which I serve as executive director, endorsed Jason Crow for Colorado’s 6th District, which covers the eastern part of the Denver metro area. He met with a group of our core leaders monthly during the campaign to discuss issues affecting our community. Throughout those conversations, we saw him significantly strengthen his position in support of immigrant rights.

Now that he’s in the House, we have a commitment to quarterly meetings throughout his term to work together on policy ideas and bring forward community perspectives. If he “forgets” his promises, we are ready to hold him accountable through further meetings, petitions, actions and, if necessary, the 2020 primary.[5] 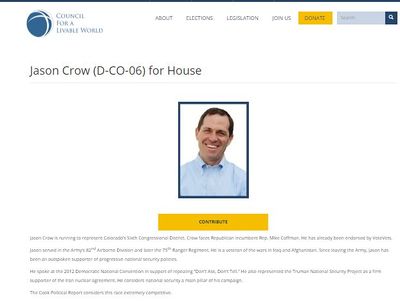 Jason served in the Army’s 82nd Airborne Division and later the 75th Ranger Regiment. He is a veteran of the wars in Iraq and Afghanistan. Since leaving the Army, Jason has been an outspoken supporter of progressive national security policies.

He spoke at the 2012 Democratic National Convention in support of repealing “Don’t Ask, Don’t Tell.” He also represented the Truman National Security Project as a firm supporter of the Iran nuclear agreement. He considers national security a main pillar of his campaign.[6]