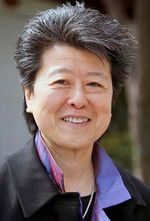 Helen Zia (born 1952) is an Asian-American journalist and scholar who has covered Asian American communities and social and political movements for decades.

She married her long term partner Lia Shigemura in 2008.

Zia is an award-winning journalist and scholar who has covered Asian American communities and social and political movements for decades. She is the author of Asian American Dreams: The Emergence of an American People, a finalist for the prestigious Kiriyama Pacific Rim Book Prize.

She is also co-author, with Wen Ho Lee, of My Country Versus Me, which reveals what happened to the Los Alamos scientist who was falsely accused of being a spy for China in the "worst case since the Rosenbergs."

Zia is former Executive Editor of Ms. Magazine. Her articles, essays and reviews have appeared in numerous publications, books and anthologies. She was named one of the most influential Asian Americans of the decade by A. Magazine.

Zia has received numerous journalism awards for her ground-breaking stories; her investigation of date rape at the University of Michigan led to campus demonstrations and an overhaul of its policies, while her research on women who join neo-Nazi and white supremacist organizations provoked new thinking on the relationship between race and gender violence in hate crimes.

A second generation Chinese American, Zia has been outspoken on issues ranging from civil rights and peace to women's rights and countering hate violence and homophobia. In 1997, she testified before the U.S. Commission on Civil Rights on the racial impact of the news media. She traveled to Beijing in 1995 to the UN Fourth World Congress on Women as part of a journalists of color delegation. She has appeared in numerous news programs and films; her work on the 1980s Asian American landmark civil rights case of anti-Asian violence is documented in the Academy Award nominated film, "Who Killed Vincent Chin?" and she was profiled in Bill Moyers' PBS documentary, "Becoming American: The Chinese Experience."

Zia received an honorary Doctor of Laws degree from the Law School of the City University of New York for bringing important matters of law and civil rights into public view. She is a graduate of Princeton University's first graduating class of women. She quit medical school after completing two years, then went to work as a construction laborer, an autoworker, and a community organizer, after which she discovered her life's work as a writer.

Zia has stated that during her childhood, she decided whe wasn't American. She said that by the time she was eight, she and her family had encountered racial prejudice because of their perceived foreignness. She said, "America didn't want me, and in that case I didn't want to be a part of it." During her teenage years, she very much identified with the black civil rights movement and its leaders.[1]

In 1982, Vincent Chin was brutally murdered in Detroit "at the height of anti-Japanese sentiment". The judge ruled it a case of manslaughter and the two killers, both autoworkers, never served a day in jail.

The case became a cause celebre for the Communist Workers Party.

A film about the case "Vincent Who?" was released in 2008, dealing with impact the case had had on activists at the time.

More than twenty-five years later, that case remains a touchstone in the struggle for civil rights and the advancement of the Asian American community. In this new documentary, VINCENT WHO?, we take a quick look back at the case, but more importantly we examine the effects the case had on the leading community activists of today and the future leaders of tomorrow.

Zia was one of the founders of American Citizens for Justice. She served as the campaign's national spokesperson and was elected president of the group for two terms.[1]

Open Letter to the Biden Campaign on “Unprepared”

Open Letter to the Biden Campaign on “Unprepared” was released May 12 2020.

":Our demands: The country’s greatest priority at this moment is to beat the COVID-19 crisis, and this requires embracing principles of antiracist solidarity and international cooperation. The Biden campaign can and should beat Trump and the GOP with a message centered on our real public health needs and the progressive values that are required to meet those needs. The “Unprepared” ad must be taken down, and all campaign messaging that fuels anti-Asian racism and China-bashing must end. We refuse to allow the Biden campaign to sacrifice our dignity in the name of political expediency."

Zia served as the president of the New York Chapter of the Asian American Journalists Association, an organization devoted to fighting media stereotyping against Asian Americans. Under Zia's leadership, the AAJA also succeeded in grabbing the attention of the national media during protests which decried the cast choices for the musical Miss Saigon, a situation where Caucasians were being cast in Asian roles.[1]

Chanting "Free Wen Ho Lee!" more than 150 people rallied in front of the San Francisco Federal Building, June 8, 2000 for a National Day of Action to protest the government's persecution of Dr. Wen Ho Lee. Dr. Lee was an employee of Los Alamos National Laboratory, which designs and builds nuclear weapons. He was jailed and charged with providing an unnamed foreign power with information on atomic weapons.

The San Francisco protest was one of many demonstrations, teach-ins, and press conferences held across the country organized by the Coalition Against Racial and Ethnic Scapegoating (CARES). CARES charges that Dr. Lee was singled out because of his Chinese ancestry, and was made a scapegoat for poor security at the weapons lab.

Los Alamos Laboratory has security problems, which have continued after the arrest of Dr. Lee. The former head of security at Los Alamos stated that Lee was targeted because he was Chinese. At the rally in San Francisco, author Helen Zia angrily told the government, "Shame, shame, shame," referring to the fact former CIA head, John Deutch also mishandled data, but he has not been charged with a crime or jailed.

Other speakers at the rally explained how the persecution of Wen Ho Lee reflects the growing tensions between the United States and China, and likened his persecution based on nationality to police harassment of African Americans and Latinos. Lillian Galedo of Filipinos for Affirmative Action stated the case against Wen Ho Lee was influenced by "cold warriors trying to maintain the 'Chinese threat.'"

Renee Saucedo, of the Centro Legal La Raza, said that Latinos can relate to Wen Ho Lee because, "We are seen as 'illegals' and suffer from racial profiling by the police." She also praised the coalition of Latinos, African Americans, and Asian Americans who came together in a statewide effort to end the common police practice of stopping African American and Latino drivers for no apparent reason, "Driving while black or brown."

As each speaker finished, they shackled themselves together with handcuffs and chains to protest Wen Ho Lee's treatment. Dr. Lee's daughter, Alberta Lee, told the San Francisco rally how her elderly father is kept in solitary confinement, with his hands chained to his waist whenever he leaves his cell.

The discriminatory and inhumane treatment of Dr. Lee has led a number of prominent Asian Americans such as former chancellor Chang-Lin Tien of the University of California, Berkeley, and former California congressperson Norman Mineta to speak out on his behalf. [3]

Helen Zia is a past recipient of Asian Americans for Equality's annual Dream of Equality award.[6]

One such Chinese American is Professor Xiaoxing Xi, who, in 2015, was falsely charged and prosecuted by the FBI for allegedly sharing technology to a Chinese-based company. He faced charges carrying a maximum penalty of 80 years in prison and a $1 million fine. After causing significant hardship and distress to Professor Xi and his family, the FBI eventually dropped the case without explanation or an apology. 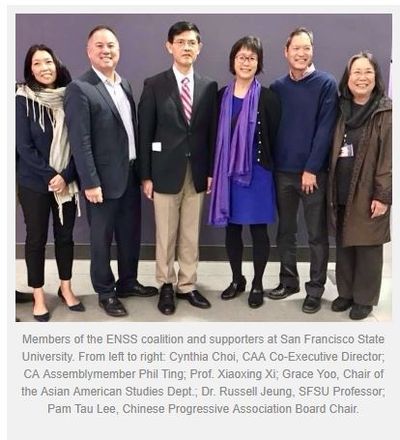 Today, Professor Xi is seeking justice and accountability for his wrongful prosecution and to help end national security scapegoating and racial profiling in general. In efforts to raise awareness and to mobilize the community, the ENSS coalition invited Professor Xi to participate in a speaking tour at San Francisco State University, University of California-Berkeley, and Stanford University. Along with other experts, Professor Xi spoke powerfully about the dangers of racial bias in government surveillance programs based on his own experience.

Regrettably, this form of discrimination is part of our U.S. history. From the Chinese Exclusion Act to the internment of Japanese Americans during World War II, Asian Americans have been labeled and profiled as perpetual foreigners and threats to national security. The Muslim Ban, police violence against African Americans, and attacks against immigrants today must be understood in this same vein.

CAA, with our ENSS coalition partners, will continue to oppose efforts to racially profile Asians Americans under the false pretext of national security, to advocate for greater government accountability, and to build alliances across affected communities.[7]