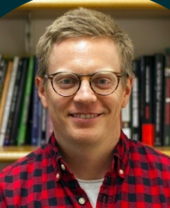 Template:TOCnestleft Derek Ford assistant professor of education studies at DePauw, is the author of Education and the Production of Space: Political Pedagogy, Geography, and Urban Revolution and Communist Study: Education for the Commons in Studies in Philosophy and Education.

Ford is active in the Answer Coalition, and coordinator of Liberation School.

My political awareness initially came through hip-hop, and Public Enemy in particular, when I was fairly young. Then, while I was still in elementary school I was introduced to communism through my best friend, whose family was from India and had historically had ties with the Communist Party of India. He was (and is) incredibly smart and advanced. He lent me a copy of The Manifesto of the Communist Party. I became politically active beginning in middle school, first around queer issues and then around police brutality and the wars on Yugoslavia, then Afghanistan, and, during my senior year, Iraq. I went to undergraduate school in Baltimore, and the proximity to DC allowed me to get more involved in the national anti-war movement, which at that time was at historic heights. Through that movement I linked up with the ANSWER Coalition (Act Now to Stop War and End Racism). I quickly realized that they were the ones doing the bulk of the organizing work, and I knew that was a group I wanted to be a part of.

I identify myself as a communist. I used to call myself a socialist, but then I would have to clarify that I'm not one of those "let's all get along socialists," who are really more like left democrats. Being a communist means being a Marxist and a Leninist, or a dialectical-materialist and a member of the Party.[1]

While Donald Trump threatened “fire and fury” against the Democratic People’s Republic of Korea August 2017, a group of people from the U.S. toured the country in what is to be the last civilian tour before the travel ban goes into effect in late August. 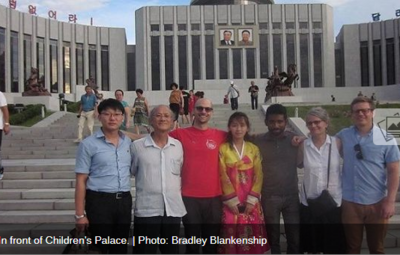 The tour, which lasted a week and ended on Aug. 13, was organized by the ANSWER (Act Now to Stop War and End Racism) Coalition, and christened the “Korea Peace Tour.” ANSWER organized their first delegation in 2015 to help people from the U.S. see the DPRK for themselves and break through what organizers call a “highly constructed, racist, and caricatured presentation” of the country.

Derek Ford, assistant professor at DePauw University and organizer for the latest Korea Peace Tour, said that “both of our delegations were received very hospitably from the second we arrived in Beijing and interacted with workers at Air Koryo”, he continued “they were really nothing but hospitable” through the entire trip.

While the U.S. press was buzzing about a possible nuclear standoff between the United States and the DPRK, Ford described a disjointed experience. “When we heard about the remarks, we were on a river in Pyongyang and watching a young couple get married on a boat that was speeding by; there was such a disconnect,” Ford said, “it seems that people [are] very confident in their military’s developments and their ability to deter direct U.S. attacks.”

Along the tour, delegates took photos of Korean culture, including bustling amusement parks, restaurants with live music, children playing at the Children’s Palace, dance classes, and much more. The sites that the delegates saw on this tour reportedly changed many of their preconceived notions about the conditions in the DPRK and painted a much different picture than what the Western media presented to them.

The tour was not only about entertainment; delegates also had the chance to visit farm cooperatives, the Korean DMZ, the Pyongyang Vegetable Science Institute, and also had the chance to have open conversations with soldiers, professors, students, researchers, and scientists. Delegates on the peace tour had visited the Sinchon Museum of U.S. War Crimes, a museum showcasing many of the United States’ war crimes during the Korean War, and even had the chance to speak with Jong Gun Song, a 72-year-old survivor of the Sinchon Massacre. Song was “one of hundreds of children who U.S. soldiers locked in a shed for a week, poured gas through a ventilation opening, and burned.”

Ford reported a deep political and class consciousness amongst Koreans, saying that they make a clear distinction between the acts of theU.S. government and the people from the U.S. “That must be something that is emphasized in the media and in the education system,” he said, “I can’t see any other way that that would be so universal around the country.”

When asked if this experience was only unique to Pyongyang or also shared across rural areas, Ford indicated that everywhere from Pyongyang, Sinchon, Kaesong, and Sariwan, people were very accepting of the delegates. Although, he clarified, that they often received curious looks because of the rarity of foreigners.

At one point, Ford said that he and another delegate became ill during the tour from traveling so much. Despite the fact that Ford did not want to go to a hospital out of fear of missing an interview with students, the hotel’s medical professional recommended that he go to a hospital just in case it may have been something serious—an experience that only took several hours from start to finish and was free of charge. Ford, in discussing a highly professional medical staff and modern equipment, referred to former World Health Organization Director-General Margaret Chan’s 2010 statement that “North Korea's health system would be the envy of many developing countries because of the abundance of medical staff that it has available.”

The delegation’s contacts within the DPRK had been skeptical that U.S. delegates would even show up for the tour in the wake of the controversial travel ban, and officials were apparently pleased with the delegation’s decision to move forward. Pyongyang has made expanding tourism a policy priority and even recently launched a tourist site to promote tourism within the country. Ford described the travel ban as a “crime” and said that he believed that the U.S. government has banned tourists from experiencing the DPRK because “when you land in the DPRK, the media and the government’s narrative quickly crumbles.”

The travel ban, which is set to last a year, will make it difficult or impossible for people from the U.S. to visit the DPRK. Ford said that “we are definitely going to be taking more people” once the ban is lifted, and that “there is a desire to challenge [the travel ban] legally.”[2]

Choson Sinbo, the pro-Pyongyang media outlet headquartered in Tokyo, highlighted 'completely changed' North Korea-U.S. relations Thursday, referring to the negotiations for the second summit between the two countries as a move to normalization of bilateral relations," reported the Korea Times. The English language South Korean newspaper notes that yesterday's story "was written on the occasion of U.S. university students' visit to the pro-Pyongyang Korea University in Tokyo and highlighted improving relations between the two countries on governmental and non-governmental levels."

Jung Da-min writes that the report "focused on the U.S. university students' visit to Tokyo, led by Professor Derek Ford of DePauw University in Indiana. It was the first student exchange between DePauw University and Korea University through their joint project titled 'Int'l Student Exchange Program: ISEP.' The U.S. delegation comprised 14 students and two professors. They toured the university's campus, museum and historic sites from Japanese colonial rule, such as a site of Korean forced labor."

The text adds, "Professor Ford also held an English lecture for students of the two universities on the subject of the history of North Koreans in Japan over the past 70 years after liberation from Japanese colonialism."

Over Winter Term, the group from DePauw became he first-ever group of U.S. students to visit the schools and institutions of Chongryon, the General Association of Korean Residents in Japan. About 700,000 ethnic Koreans live in Japan, descendants of Koreans who settled there during Japan’s rule of Korea before World War II; as conscripted laborers during the war; and as post-war refugees.

Derek Ford, assistant professor of education studies at DePauw, was among the presenters at the 2018 Global Peace Forum on Korea (GPFK), which took place at Columbia University in New York in September. Dr. Ford visited North Korea in 2017.[3]

“No sanctions, no coup, Venezuela we stand with you!” echoed from Monument Circle on a cold Indianapolis afternoon on March. 31 2019. Organized by the newly formed Peace in Venezuela Coalition — of which the Party for Socialism and Liberation is a founding member—the protest was the third solidarity demonstration in the city since the U.S. coup attempt against Venezuela began late January.

The week earlier, the coalition held a teach-in at Butler University. The teach-in had an array of speakers who addressed imperialism, the history of U.S. intervention in Latin America, the gains of the Bolivarian Revolution as well as the tasks of the anti-war movement.

The day after the teach-in, a pro-intervention rally was called for Monument Circle. Not a single person showed up.

The March 31 anti-intervention rally, by contrast, drew over 30 people and three TV news stations. The primary demands were: no coups, no sanctions, and no war. The numbers of attendees have increased at each protest.

Conrad Thompson, who helped initiate the Peace in Venezuela Coalition, told Liberation News that he “Came out to protest to encourage others to do the same. I hope we reached people who sympathize with our cause who thought they were alone.”

Noah Leninger, co-coordinator of ANSWER Indiana (Act Now to Stop War and End Racism), read a solidarity statement prepared by the Peace in Venezuela Coalition. Brad Lorton, of the Democratic Socialists of America, and Derek Ford, of the Indianapolis Party for Socialism and Liberation also delivered speeches.[4]