Dalia Mogahed is the Senior Analyst and Executive Director of Gallup Center for Muslim Studies.[1] 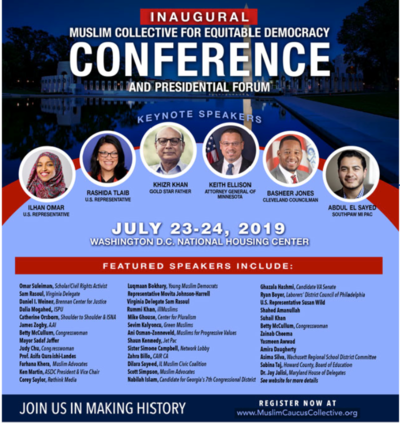 From the Clarion Project;[3]

New evidence suggests the Muslim Brotherhood has big plans for the U.S. and a variety of countries around the globe that involve hundreds of millions of dollars in a bid to gain political influence.

The exact details come from a mole inside a meeting of Muslim Brotherhood leaders in Istanbul, Turkey, and made public in Arabic by the Egyptian news outlet 7th Day.

The gathering took place at the city’s Akgun Hotel with members of the Brotherhood’s U.S.-based revolutionary council among the 21 in attendance.

Much of the conversation focused on attempts to curry favor in Congress.

The Istanbul meeting was told how Brotherhood officials heard from Price and Lowenthal that they would try to reduce U.S. aid to Egypt by 40 percent by the end of 2017. The Brotherhood is deeply opposed to the current pro-American regime in Cairo.

The organization held rallies in New York’s Times Square and with CAIR and other Islamist organizations in Illinois and Boston.

Among those said to have attended a Brotherhood-backed event was former Barack Obama adviser Dalia Mogahed.