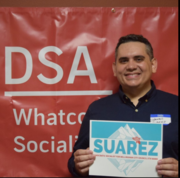 Chanan Suarez is a leader of Whatcom Democratic Socialists of America. Lives in Bellingham. Washington.

A socialist since returning from Iraq as a Navy corpsman (an enlisted medical specialist), Suarez — a Miami native — settled in Seattle, where he became one of the leading figures on the left. As the founder and president of the Seattle chapter of Iraq Veterans Against the War, Chanan addressed thousands and led marches throughout the Bush years. He later founded Queer Ally Coalition to protect the LGBT community from intensifying gay bashing in Seattle’s rapidly gentrifying Capitol Hill.

Suarez is currently shop steward at the American Federation of Government Employees Local 3937, where he works at the Social Security Administration as a bilingual claims specialist. He is also the cochair of the Whatcom Democratic Socialists of America.[1] 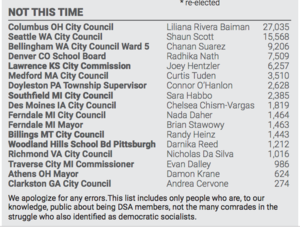 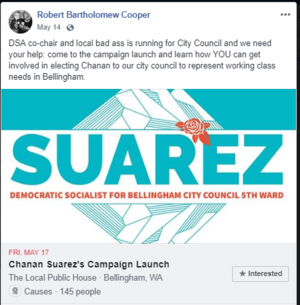 DSA co-chair and local bad ass is running for City Council and we need your help: come to the campaign launch and learn how YOU can get involved in electing Chanan to our city council to represent working class needs in Bellingham.

According to Chanan Suarez:

This campaign has been bottom-up, grassroots from the get-go. The platform was discussed and democratically decided on, through a vote. There was a month and a half when we decided to pay two very dedicated volunteers to focus on the campaign. The rest has been volunteer-driven.

The dedication we’ve experienced has been beautiful. We launched the campaign mid-May on a Friday. The following day, we already had a canvassing team out. We’ve been canvassing since, with people showing up on a weekly basis. It’s been very inspirational. We’ve knocked on a little over five thousand doors.[3] 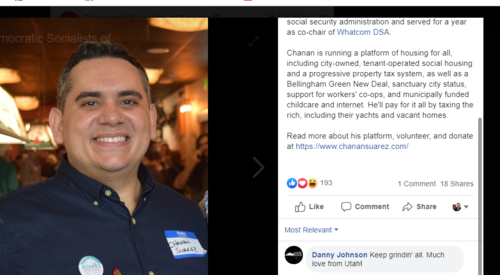 DSA is proud to endorse Chanan Suarez for Bellingham, WA City Council, up for election Tuesday, November 5th, with ballots getting mailed to voters on October 16th!!

Chanan is a gay Jewish Venezuelan American, renter, and union steward. He's also an anti imperialist Iraq War veteran decorated with a Purple Heart who co-founded the Seattle chapter of Iraq Veterans Against the War and Seattle Queer Ally Coalition. In Bellingham, Chanan has worked for the social security administration and served for a year as co-chair of Whatcom DSA.

Chanan is running a platform of housing for all, including city-owned, tenant-operated social housing and a progressive property tax system, as well as a Bellingham Green New Deal, sanctuary city status, support for workers' co-ops, and municipally funded childcare and internet. He'll pay for it all by taxing the rich, including their yachts and vacant homes.