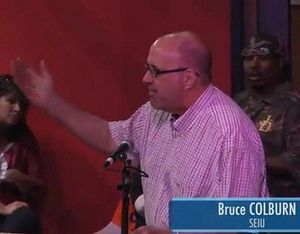 Bruce Colburn is a Wisconsin labor leader and socialist.

In 1996 Bruce Colburn was secretary-treasurer of the Milwaukee County Labor Council AFL-CIO, co-chair of the Campaign for a Sustainable Milwaukee and the Milwaukee Jobs Initiative, president of Wisconsin Citizen Action, and one of the founders of Progressive Milwaukee.[1]

In 1995, Bruce Colburn was an officer of the Milwaukee Central Labor Council and the Chair of the local New Party affiliate in Milwaukee.

The Chicago New Party began to get organized in January 1995.[2]

On Saturday, January 14, the New Party in Chicago took another step in its effort to establish itself as a political force by holding a major outreach meeting directed at Chicago's Left. About 100 people, with sizable delegations from DSA and CoC among others, heard Bruce Colburn and Elaine Bernard preach the gospel of the New Party...

At the AFL-CIO's executive council meetings in Los Angeles in February 1997, the New Party made a presentation to the Committee on Political Education (COPE) on fusion, independent politics, the future of the republic, etc.

There were about 40 political directors and staff around the table, and another 60 or so people around the edges (State Federation presidents, communications staff, etc.). Bruce Colburn from Progressive Milwaukee/NP was introduced by COPE Director Steve Rosenthal, and then Bruce moderated the session. NP Chair Joel Rogers and Dan Cantor presented some overheads on fusion, offered general comments about the political moment and why labor should seriously think about independent political formations, and then took a lot of questions and comments.

Two clear positions emerged over the next 90 minutes. Several unions held the view that an independent, labor-friendly formation could tremendously increase union leverage vis-a-vis the Democrats. Interestingly, some folks also felt that it would allow them to reach members who are alienated from the Democrats but who retain economic populist views. Speaking against experimentation with independent structures were those who feel that "it's already hard enough to get our members out to vote, let alone vote on a new line." The overall reaction of those who spoke leaned slightly to the positive side, but only slightly.

Finally, I should say a word about the guy in the back of the room who looked incredibly unhappy the entire time. He turned out to be Congressman Martin Frost of Texas, the chair of the Democratic Congressional Campaign Committee. He had to listen for almost 2 hours while the political directors of nearly every major union in America calmly discussed the New Party, fusion, and their dismay with the Democratic Party. Something tells me the DNC heard about this one.

In 1996 Milwaukee AFL-CIO Central Labor Council President Democratic Socialists of America member Bruce Colburn and New Party chair Joel Rogers wrote a "provocative article in the November 18, The Nation argued "that the left's capacity for independent political action must be built from the grassroots up. Their stress on independent left electoral activity at the local level — whether inside, outside, or fused with the Democratic Party — evidences the realism of the New Party's approach to building a third electoral force".[4]

In 2010, Bruce Colburn served on the SEIU Wisconsin State Council Executive Board.[5]

In April 2011, Wisconsin union officials called the post-election correction of an error that converted a 200-vote deficit into a 7,000-vote lead for the conservative candidate, incumbent Justice David Prosser, for the state Supreme Court judgeship “unprecedented.”

“In every other instance in which previously uncounted or miscounted votes have been brought to light it has been to the benefit of the progressive candidate,” claimed Christine Lamitina, spokeswoman for the Service Employees International Union of Wisconsin. “Is this election in Wisconsin going to be the exception that contradicts a well-established history?” Lamitina appealed for President Obama and his Attorney General Eric Holder through Democratic Congresswoman Tammy Baldwin to “step in and right the wrong that’s been done to the working people of this state.”

SEIU Vice President for Politics and Growth, Bruce Colburn vowed “unrelenting efforts to restore victory for Joanne Kloppenburg. We spent millions of dollars and millions of man-hours to get her elected. We won’t take ‘no’ for an answer. We will takeover the streets. We will clog the courts with lawsuits. We will shut this state down if that’s what it takes to get justice for our cause.”[6]

Speaking to Reuters in May 2012 SEIU Healthcare Wisconsin vice president of politics and growth, Bruce Colburn said of Wisconsin Senate candidate Tammy Baldwin... "We were looking for a champion, and Tammy fit the bill," .

Baldwin has won endorsement from the local SEIU.[7]

Thousands carrying signs that said "Stop Ripping Families Apart" and "Education not Deportation" paraded Sunday from Milwaukee's south side through downtown and on to Veterans Park at the lakefront for the 2012 May Day march for immigrant rights.

Christine Neumann-Ortiz, executive director of Voces de la Frontera, the immigrant and low-wage worker group that organized the marches, said although the turnout was not as strong as in other years, it was still large and "that shows the consciousness and sends a message on the issues we're fighting for."

The focus of the May Day march centered on the U.S. Supreme's Court's consideration of Arizona SB 1070.

Bruce Colburn of the state AFL-CIO told the crowd: "We are one, whether we are fighting Arizona's anti-immigrant law or Wisconsin's union-busting law. We are one family."

U.S. Rep. Gwen Moore (D-Milwaukee) told the crowd she continues to work for passage of the DREAM Act, a bill that would allow those who were brought here as children by their parents and who graduate from state high schools to pay in-state tuition in college.[8]