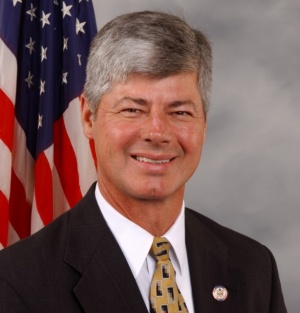 Bartholomew "Bart" Thomas Stupak was a Democratic member of the United States House of Representatives, representing the 1st district of Michigan.

Born on February 29, 1952, Bart was raised in Gladstone, Michigan and grew up in a family of 10 children. Stupak went on to graduate from Gladstone High School. He then left his hometown for North Western Community College in Traverse City, to earn his Associates Degree. He returned to Gladstone and began his career in public service as an Escanaba police officer in 1972.

Following his retirement from the police force, Bart and his wife Laurie, and their two sons, Ken and Bart Jr., moved to Menominee. There, Stupak set up a small law practice.[1]

From 1989-90 Bart represented Menominee, Delta, and Dickinson counties in the Michigan State House of Representatives.

Bart Stupak was first elected to Congress in 1992 to represent the First Congressional District.

In response to the terrorist attacks of Sept. 11, 2001, Stupak was named to the Democratic Caucus Task Force on Homeland Security.[1]

The Council for a Livable World, founded in 1962 by long-time socialist activist and alleged Soviet agent, Leo Szilard, is a non-profit advocacy organization that seeks to "reduce the danger of nuclear weapons and increase national security", primarily through supporting progressive, congressional candidates who support their policies. The Council supported Bart Stupak in his successful House of Representatives run as candidate for Michigan.[2]

The following have worked as staff members for Bart Stupak:[4]