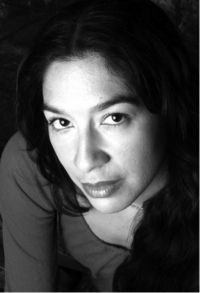 Alicia Lueras Maldonado is a photographer, producer, filmmaker and actor. She is Mestiza and a Native New Mexican, born and raised in the community of Atrisco. Alicia holds Bachelor of Arts degrees in Communication & Journalism and Spanish from the University of New Mexico, with concentrations in photography, film, literature and dance.

She has spent the last 20 years working within the intersections of art, politics, community organizing and social justice. As the Founder & CEO of Atlixco Productions, she helps individuals and organizations design creative strategies for their work, produces and directs radio, theatre and film, shoots photographs and brings years of organizing, management, and consulting experience to her work.

Alicia is a Founding Member of the New Mexico Strategic Leadership Institute, a statewide learning community for New Mexico leaders and she is also a Founding Member and the former Creative Director of the Center for Civic Policy, a local nonprofit working to advance progressive policies at a statewide level. Alicia is the Governing Council President for the South Valley Academy, a small charter school in the Albuquerque. She is an invited artist to the Littleglobe Center for Creative Community Engagement and she also sits on the board of AMP Concerts, a nonprofit dedicated to creating community through music. She is a member of Las Meganenas, a Latina theatre troupe.[1]

Alicia Maldonado's work in the early 90’s documenting the fight to protect the Petroglyph National Monument, a Native American sacred site, landed her her first job as a community organizer.

I was producing a video for my broadcast journalism class including interviews with the organizers from the Petroglyph Monument Protection Coalition (PMPC), developers, city officials and others. I eventually became a member of PMPC and when I graduated from the University of New Mexico they offered me a job. I had the privilege of working with a group of talented organizers who would become my friends and mentors who I still work with to this day.

I was excited when I learned that Building Movement Project was interested in working in New Mexico, along with its partner organizations, Encuentro and the SouthWest Organizing Project. The work of building relationships across sectors has been of particular interest to me and I am looking forward to helping to guide this process.[2]

Alicia Maldonado and friends created several organizations to tackle the diverse needs of the community including a for-profit political consulting firm, Soltari Inc., with the goal of getting local progressive elected into office. One of their early successes was U.S. Senator Martin Heinrich; Soltari Inc. ran his first political race for Albuquerque City Council.

Despite many other victories we needed to do the long-term work on civic engagement, public policy and leadership development. We ended Soltari Inc. and created the Center for Civic Policy, a nonprofit that is part of the State Voices network and a nationally recognized innovator in the civic engagement sector. We also started the New Mexico Strategic Leadership Institute, a statewide leadership network to bring together leaders from across the state to build relationships and learn from one another.[3]