Ady helped launch Local Progress and served as co-director until February 2018. He is currently the co-director of Fed Up, an initiative also housed at CPD. Before joining CPD, Ady was a law clerk to the Hon. Shira A. Scheindlin in the Southern District of New York. Prior to that he was a Liman Fellow with Make The Road New York, where he represented low-wage workers seeking to recover unpaid wages, engage in collective action, and obtain safe and dignified working conditions. He helped design and draft policy proposals to enhance the quality of low-wage jobs in New York City including the right to paid sick days, regulation of major retailers, and unionization of the car wash industry. He graduated from Yale Law School and Columbia College, cum laude.[1]

Lives in Santa Barbara. Partner of Rachael King. He is a member of Democratic Socialists of America.[2] 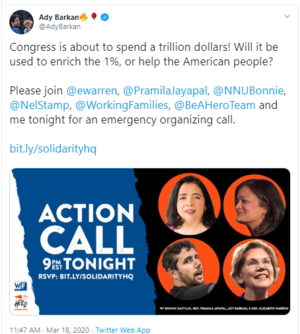 Congress is about to spend a trillion dollars! Will it be used to enrich the 1%, or help the American people?

Santa Barbara Democratic Socialists of America May 13 at 7:51 PM:

Today we met with Salud Carbajal as part of a coalition led by Santa Barbara resident and Medicare for All hero Ady Barkan. Salud listened to our healthcare horror stories, agreed that healthcare is a right and Medicare for All should be our goal, but stopped short of signing on to Medicare for All (H.R. 1384) even as he cited that it would save us $2 trillion dollars and prevent millions of deaths. Why won’t Salud sign on to this bill if he agrees with us? Does he lack the courage necessary to stand with us and fight?

POWER to the People's Convention

POWER to the People's Convention in Pittsburgh! An INSPIRED thank you to the Center for Popular Democracy/Local Progress, Make the Road, WORKING FAMILIES PARTY!, Alliance of Californians for Community Empowerment (ACCE), SEIU 32BJ, and so many others! — with Brad Lander, Helen Gym, Nikki Fortunato Bas, John Avalos, Tarsi Dunlop, Sarah Johnson and Ady Barkan at Center for Popular Democracy.