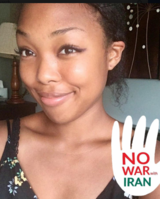 Adelana Akindes is a Wisconsin activist. 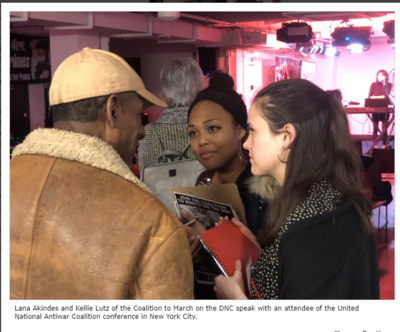 Lana Akindes and Kellie Lutz of the Coalition to March on the DNC speak with an attendee of the United National Antiwar Coalition conference in New York City
.

In February 2020 organizers with the Milwaukee-based Coalition to March on the DNC attended the national conference of the United National Antiwar Coalition (UNAC), to build support for a major protest at the Democratic National Convention in July.

The Coalition to March on the DNC is a broad coalition of left and progressive forces who plan to bring popular demands to the 2020 Democratic National Convention, slated to take place in Milwaukee, Wisconsin. The march will be held on the opening morning of the convention, Monday, July 13.

“All eyes will be on Milwaukee when the people’s movements protest outside the DNC as it takes place at the Fiserv Forum, July 13 through July 16, 2020. The Coalition calls on all progressive, left, democratic and socialist organizations to join us in unity,” said Omar Flores, spokesperson for the Coalition.

UNAC is celebrating its 10th anniversary as the leading U.S. anti-war coalition, with its fifth national conference taking place February 21-23. Representatives from nearly 60 organizations from across the country attended Friday’s opening panel, titled “Opposing Imperialist Wars,” which featured Bahman Azad of the U.S. Peace Council, Bernadette Ellorin of Filipina-American organization BAYAN-USA, and Camilo Mejia, a Nicaraguan-American who became a prisoner of conscience for refusing U.S. military deployment during the Iraq War. The panel was moderated by longtime anti-war and labor activist Joe Lombardo.

The Coalition to March on the DNC has already received dozens of endorsements from groups across the country, many of which are planning to travel to Milwaukee for the protest.[1] 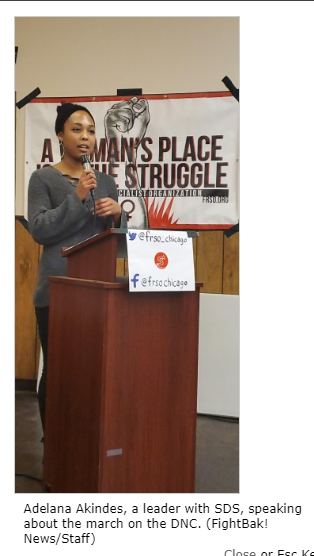 According to Ethan Costello of Kenosha, WI Students for a Democratic Society (SDS) organized a #FreeChrystul rally at UW-Parkside on February 5 2020 that saw 40 protesters attend. The demonstrators congregated outside the building where District Attorney Mike Graveley, Chrystul Kizer’s prosecutor, was teaching his first class of the spring semester, on criminal law.

The group began with chants that echoed across the campus thanks to the excellent acoustics between campus buildings. Coinciding with the start of the class period, speakers from different organizations and backgrounds shared their messages. These included Adelana Akindes, a leader with SDS; Annia Leonard, from Uplifting Black Liberation And Community (UBLAC); Michael Bell, Sr., the father of Michael Bell, who was shot and killed by the Kenosha Police Department in 2004; and Devore Taylor, Chrystul’s mother.

Taylor said that Graveley “had evidence about not only Chrystul but a whole bunch of others. It wasn’t just her. And the fact it took for her to do something because she was tired of it.” She added, “He is trying to sweep the whole problem under the rug but it’s so much bigger than her.”

The demonstrators then marched to the doors of the hall in which Graveley was teaching a class not more than 100 feet away, chanting “Hey hey, ho ho! Graveley has got to go!” and “When Chrystul Kizer is under attack, what do we do? Stand up, fight back!”

In case Graveley could not hear or was attempting to ignore the protesters outside his classroom, SDS organizers plastered his classroom with flyers saying “Chrystul Kizer defended herself” and left copies of the Lawyers Guild letter on desks so that his students knew who was teaching their class. This was only the first among what is sure to be many actions on campus against DA Graveley as the students from SDS attempt to get him removed from teaching there.[2]