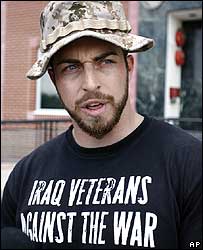 Adam Kokesh is an Iraq War U.S. soldier who turned anti-war and anti-U.S., while aligning himself with some controversial individuals and groups across the ideological and political spectrum.

coming soon - info from April 2011 AIM column and other sources...

Kokesh, a libertarian Republican, ran for Congress in New Mexico’s 3rd Congressional District in 2010. He lost in the Republican primary but has since begun hosting a radio show on Russia Today.[1]

“Adam Kokesh has been a tremendous supporter of mine. Now, it is time for me to support him.”

“As a fellow Veteran, Adam understands the many challenges facing our brave men and women in Uniform and the steps we must take to strengthen our national defense.

“Adam Kokesh has dedicated his life to fighting for Liberty. He has set himself apart as one of the bold young leaders our Country sorely needs as we strive to restore our Freedoms and what has made America the greatest nation in history. I am very happy that Adam has decided to run for Congress and wholeheartedly endorse him.”

It was announced in April 2011, that Adam Kokesh had joined the Russian television channel Russia Today as an on-air journalist. Kokesh, a former U.S. Marine, so-called anti-war activist, was scheduled to start hosting a program on April 11th entitled "Adam vs The Man". His press agent is Nena Bartlett, "a former assistant campaign manager for Senator Rand Paul (R-KY). More details on both of them can be found in Cliff Kincaid's April 5, 2011 column "KGB TV to Air Show Hosted by Anti-war Marine Vet"[3].

Former congressional candidate and Iraq war veteran Adam Kokesh was arrested in late May, 2011, after dancing at Jefferson Memorial. Video of the arrest has over half a million views on YouTube, and Kokesh plannied to dance at the memorial again.

Nearly 2,000 said they will attend the “dance party” on Facebook. The Facebook page said that this is not a protest.

The Facebook event said, “You don’t have to risk arrest, you can dance on the steps outside in support or join us in civil disobedience in the memorial!”[4]

On June 4, 2011, Kokesh refused to discuss receiving payment from Putin at the Jefferson Memorial.