The World Can't Wait is affiliated with United for Peace and Justice.[1], the Alliance for Global Justice[2] and is a creation of the Revolutionary Communist Party.

"Drive Out the Bush Regime" Protests

The marxist-dominated World Can't Wait organization scheduled to major protests in Washington, D.C. on January 31 ("Bring the Noise and Drown Out Bush's Lies"} at the Capitol and the Feb. 4th "We will take our demand to the White House" demonstration demonstration behind the White House.

They took out to full-page ads in the Washington City Paper (1/26 and 2/06/06) to promote these demonstrations and listed some of the protests signers of "The Call" "World Can't Wait: Drive Out the Bush Regime", which is reproduced below.

DEMONSTRATE: Tuesday, January 31, 2006, 8:00 PM Protest on the West Side of the U.S. Capitol. Bring the Noise and Drown Out Bush's Lies. In large cities and town squares across the country - we will rally one hour before Bush's address. At 9:00 PM let the world hear us as we symbolically drown out Bush's lies - bring your own noises - drums, pots and pans, musical instruments - your voices. In DC bring flashlights to shine on Bush's lies. Let taxi horns blare and church bells ring, as we bring our own state of the union message: BUSH STEP DOWN!

Saturday, February 4, 2006, 11:00 AM, Washington, D.C. at 17th & Constitution. We will take our demand to the White House. This regime is immoral, dangerous and indictably criminal. Bush Lied. Bush Spied. Bush Step Down. 2006. 2008. Too late. Turn your outrage into mass political action.

"The World Can't Wait -- DRIVE OUT THE BUSH REGIME! www.worldcantwait.org

(several quotes and then names of signers of "The Call)

"The whole disastrous course of this Bush Regime must be STOPPED...We must and can create a political situation where the Bush regime's program is repudiated, where Bush himself is driven from office, and where the whole direction he is taking society is reversed. We in our millions must and can take responsibility to change the course of history. THE FUTURE IS UNWRITTEN - WHICH ONE WE GET IS UP TO US."

"THAT WHICH YOU WILL NOT RESIST AND MOBILIZE TO STOP, YOU WILL LEARN - OR BE FORCED - TO ACCEPT." - From the Call for "The World Can't Wait, Drive Out the Bush Regime"

A similar list of signers appeared in the Washington City Paper, Feb. 3,2006, Page 2, in WCW full-page ad "Bush Step Down". There were a few new names added to the original Jan. 27th list. Unless noted, all of the above were also listed in this later ad.

{KW: July 2010 - Note: of historical interest is the fact that three of these signers also supported the pro-Hamas Gaza Flotilla that made two attempts to run the Israeli anti-smuggling blockade of Gaza. They were:

The following is the complete text of the full-page ad in the Washington City Paper, February 3, 2006, Page 2. minus the above listed additional sponsors of "The Call".

State of The Union Emergency! Demonstrate on Saturday, February 4, 2006 Protest in Washington D.C. 11:00 Am 17th and Constitution NW

Come to our meetings at our office every Wednesday at 7:00 PM

[Text enclosure block] SIGN THIS CALL & CONTRIBUTE ALL YOU CAN to printe this ad in other publications, and to build a movement with the capacity to actually drive out the Bush regime. We suggest $200 but don't let this limit what you would give to bring in a better future. Donate on-line at www.worldcantwait.org or by check made out to World Can't Wait. Mail to: World Can't Wait, 305 Madison #1166, New York City, NY 10165. Tax-deductible donations of $100 or more to support the educational activities of World Can't Wait can be made by check payable to Alliance for Global Justice. earmarked 'for WCW' in the memo on the check. Mail to: "World Can't Wait", 305 Madison #1166 The Alliance for Global Justice is a 501(c)(3) organization. 1-866-973-4463

(The full text of The Call) is reproduced here in its entirety from the second half of the ad:

"We Demand BUSH STEP DOWN and take your program with you!"

People look at all this and think of Hitler - and they are right to do so. The Bush regime is seeting out to radically remake society very quickly, in a fascist way, and for generations to come. We must act now; the future is in the balance.

Millions and millions are deeply disturbed and outraged by this. They recognize the need for a vehicle to express this outrage, yet they cannot find it; politics as usual cannot meet the enormity of the challenge, and people sense this.

There is not going to be some magical "pendulum swing." People who steal elections and believe they're on a "mission from God" will not go without a fight. There is not goign to be some savior from the Democratic Party. This whole idea of putting our hopes and energies into "leaders" who tell us to seek common ground with fascists and religious fanatics is proving every day to be a disaster, and actually servies to demobilize people.

But silence and paralysis are NOT acceptable. That will you will not resist and mobilize to stop, you will learn - or be force - to accept. There is no escaping it; the whole disastrous course of this Bush regime must be STOPPED. And we must take the responsibility to do it.

And there is a way. We are talking about something on a scale that can really make a huge change in this country and in the world. We need more than fighting Bush's outrages one at a time, constantly losing ground to the whole onslaught. We must, and can, aim to create a political situation where the Bush's regime's program is repudiated, where Bush himself is driven from office, and where the whole direction he has been taking society is reversed. We, in our millions, must and can take responsibility to change the course of history.

Acting in this way, we join with and give support and heart to people all over the globe who so urgently need and want this regime to be stopped.

This will not be easy. If we speak the truth, they will try to silence us. If we cat, they will try to stop us. But we speak for the majority, here and around the world, and as we get this going we are going to reach out tot he people who have been so badly fooled by Bush and we are NOT going to stop.

This point is this: history is full of examples where people who had right on their side fought against tremendous odds and were victorious. And it is also full of examples of people passively hoping to wait it out, only to get swallowed up by a horror beyond what they ever imagined.

THE FUTURE IS UNWRITTEN. WHICH ONE WE GET IS UP TO US.

Some of the thousands of people and organizations who have sign the Call (above):

(From Asner to Zinn, as listed above from first ad and with a few new listed additional signers) 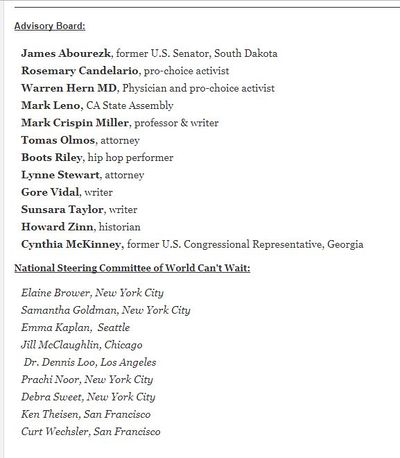