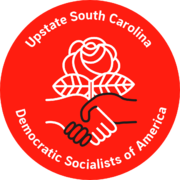 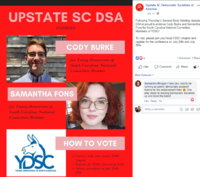 To vote, please join your local YDSC chapter and register for the conference on July 24th and July 25th. 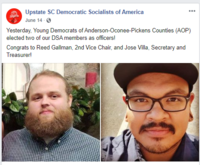 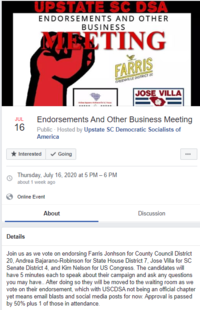 Endorsements And Other Business Meeting

Join us as we vote on endorsing Farris Jonhson for County Council District 20, Andrea Bajarano-Robinson for State House District 7, Jose Villa for SC Senate District 4, and Kim Nelson for US Congress. The candidates will have 5 minutes each to speak about their campaign and ask any questions you may have.. After doing so they will be moved to the waiting room as we vote on their endorsement, which with USCDSA not being an official chapter yet means email blasts and social media posts for now. Approval is passed by 50% plus 1 of those in attendance.