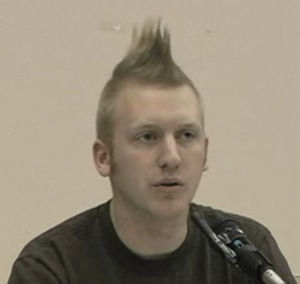 Stephen Von Sychowski is a Vancouver based leader of the Young Communist League of Canada. He is also co-chair of the Young Workers Committee of the Canadian Office & Professional Employees Union.[1]

Before his election, Stephen spoke to the youth delegates about his work as second vice president at the Vancouver and District Labour Council, his efforts on the BC Federation of Labour’s minimum wage campaign and Grant’s Law, and the Employee Action Rights Network, dedicated to educating and protecting young people who don’t have a union.

Stephen was elected to a three year term. Eli Goree from ACTRA Toronto was elected as youth vice president. [2]

In 2010, the CC of the Young Communist League of Canada elected an executive of four people including Drew Garvie, YCL Ontario organizer, as at large; Marianne Breton Fontaine, leader of the LJC-Quebec and editor of Jeunesse Militante as treasurer; Stephen Von Sychowski as Central Organizer, and Johan Boyden as General Secretary.[3]