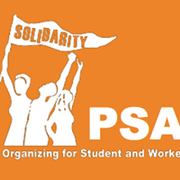 UTK Progressive Student Alliance is based on the campus of the University of Tennessee, Knoxville and is close to the Freedom Road Socialist Organization.

In 2008 Anne Barnett was chairperson the UTK Progressive Student Alliance.[1] 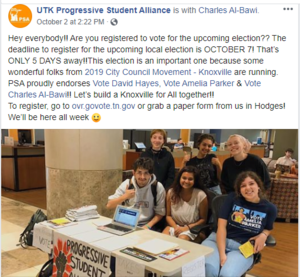 Hey everybody!! Are you registered to vote for the upcoming election?? The deadline to register for the upcoming local election is OCTOBER 7! That’s ONLY 5 DAYS away!!This election is an important one because some wonderful folks from 2019 City Council Movement - Knoxville are running. PSA proudly endorses Vote David Alex Hayes, Vote Amelia Parker & Vote Charles Al-Bawi!! Let’s build a Knoxville for All together!!

To register, go to ovr.govote.tn.gov or grab a paper form from us in Hodges! We’ll be here all week

The UTK Progressive Student Alliance held a vigil to support the Amazon rainforest at the Rock September 2019. About fifteen people showed up to raise visibility about the current status of the rainforest and raise funds for the preservation of the Amazon.

Students painted the Rock with the message, “Get your power to the resistance,” followed by the hashtag “ACT 4 AMAZONIA.” They also painted the name of an organization that works to preserve the rainforest, AmazonWatch.org.

One of the students gave a brief speech dedicated to the Amazon rainforest and those who lost their homes during the area’s deforestation, and a moment of silence followed.

One of the organizers, Evora Kreis, a sociology and Spanish double major, addressed the issues in the Amazon.

According to Anna Helms, an alumnus of UT, Amazon Watch in particular is working to keep the Amazon intact by connecting 400 groups of different Amazonian, indigenous peoples to indigenous activist groups and social justice groups fighting against the destruction of the rainforest. Amazon Watch then grants the groups financial aid. The raised fund from UT’s vigil will be sent to the organization.

One of the participants of the vigil, Marium Hussain, an environmental sociology major, discussed the role that students should have in addressing this problem.

Sarra Ghezzaz, another participant and a neuroscience major, explained that Amazon deforestation should concern the entire world.

“I’m just here to support. I’m helping any way that I can because honestly, it’s affecting all of us. Not just us in Knoxville and not just the people in the rainforest but the entire world right now,” Ghezzaz said. “It’s affecting everybody. So, I think everybody should be doing something to help those in need in any way they can.”[2] 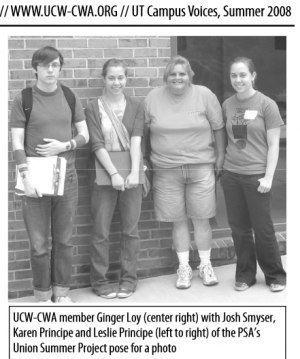 "A Frightening Fundraiser for PSA"

State lawmakers will join the United Campus Workers, UT College Democrats, Progressive Student Alliance and Statewide Organizing for Community Empowerment during a fact-finding trip to learn more about the potential impact of the Governor's plan to possibly bring privatization to the campus of UT Knoxville.

Senate Minority Leader Lee Harris and state Rep. John Ray Clemmons will hear from campus employees, students and faculty about the potential impacts that layoffs and outsourcing will have on their families and campus life. Organized by JT Taylor.

Special guest Cazembe Jackson, our trans brother and bad ass organizer for South will share his story as a transman in the movement and how he held his comrades accountable for his pronouns. He will also make awareness for pronouns and elevating trans existance more intersectional mentioning policy brutality and mass incarceration of black transwomen. 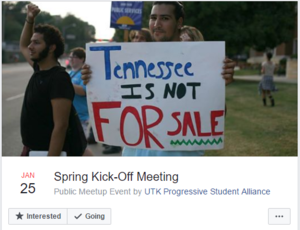 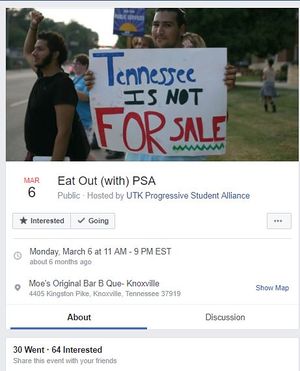 Percentage night at local restaurant Moe's! Support UTK's oldest progressive student organization, the Progressive Student Alliance, and learn all about what we do![8] 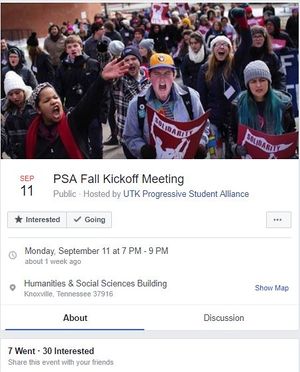