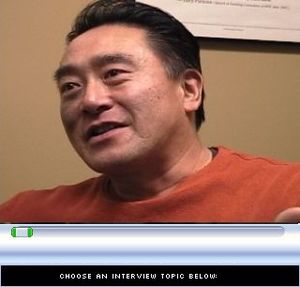 Michael Woo was born and raised in Seattle. He attended the University of Washington in the late 1960s and worked briefly in the airline industry before being hired by the United Construction Workers Association in 1970. Woo, a Chinese American, was quickly transformed by the experience of helping black workers enforce the court-ordered desegregation of Seattle’s construction unions, and ended up doing organizing work for the UCWA throughout its lifespan (until roughly 1980).[1]

In the summer of 1972, Woo was hired by the UCWA to be one of its organizers, and he led its electrical and sheet metal worker subcommittees. In 1973, he helped expand the UCWA organizing model— organizing workers of color to advocate for themselves— when he co-founded the Alaska Cannery Workers Association. From 1975 to 1980, Woo also helped put out No Separate Peace, a radical publication to organize and give voice to Seattle’s workers of color.

Woo currently serves as the Director of Legacy of Equality, Leadership and Organizing , continuing the UCWA’s community organizing tradition with an institution that traces its roots to the law office that coordinated UCWA and ACWA litigation in the 1970s, the Northwest Labor and Employment Law Office. [2]

In December 1999, the Fair Access to Sound Transit (FAST) Jobs Coalition negotiated the Project Labor Agreement (PLA) with Sound Transit. PLA terms guarantee that a significant amount of Link Light Rail construction work will be performed by people of color, women and by local apprentices. Legacy of Leadership and Equality (LELO) member Michael Woo initiated the formation of the FAST Jobs Coalition together with community partners to secure livable family wages, equality and fairness. One prime focus of the FAST Jobs Coalition is to ensure that Sound Transit and its subcontractors follow the terms of the PLA.

In 2009 Michael Woo was listed as an endorser of the Center for Labor Renewal[4].

People lined up at microphones at a July 23 "speak out" here to demand that Congress stop kowtowing to the corporations and do what voters elected them to do: create good jobs at a living wage.

More than 1,000 people, packed the Brockey Center on the campus of South Seattle Community College for the "Speak Out for Good Jobs Now, " one of a series of hearings across the nation sponsored by the 81-member Congressional Progressive Caucus.

Listening to the often angry testimony was Rep. Jim McDermott, D-Wash., a leading member of the Progressive Caucus who told the crowd, "What is needed is citizen action....You have the power to organize," he said.

Deborah Osborn, wearing a purple SEIU T-shirt told the hearing she has two college degrees and is a certified nursing assistant. Her husband, also a college graduate, has been unemployed for a year. Yet the longstanding "social contract" promises that a college degree is the path to "financial success."

Jonathan Bernal Garcia, a senior at Chief Sealth High School decried the lack of good jobs for youth when they graduate from high school or college. "Please stand with us by enacting laws that are just, humane, and fair," said Garcia, a member of One America.

Jazmin Santacruz, Eastern Washington organizer of One America, filled a bus with 53 immigrant workers from Yakima, Walla Walla, and Pasco, Washington to attend the speakout.

"Stop passing anti-immigrant laws that punish immigrant workers," she declared. "All these workers want to do is support their families and in the process they bring money into the economy." She urged enactment of the Dream Act to allow undocumented immigrant youth to attend college in the U.S. She led the crowd in chanting "si se puede."

Khayah Brookes, a senior physics student at the University of Washington, a member of the Academic Student Employees organized by the United Auto Workers said she was forced twice to drop out of school because she ran out of money.

Michael Woo, a veteran Chinese American labor and community organizer, who chaired the meeting urged the crowd to take time to fill out the Progressive Caucus postcard addressed to lawmakers headlined, "Get Congress on Track...Rebuild the American Dream."

"We have 1,000 people in this room and we want to get the message back to Washington, D.C." he said. "We want to tell Congress to rebuild the American dream. We need good jobs."

Martin Luther King County Executive Dow Constantine thankedd the crowd for the testimony. "This is so powerful," he said. "It is hard to listen to the stories told today. We need to get the message to Congress that they were elected to create an economy that serves the people, not the corporations and the wealthy."

Mia Franklin, a caregiver for her disabled daughter and an employee of ARC of King County, a non-profit that serves developmentally disabled people, drew cheers, telling the crowd, "I don't believe there is a budget crisis. They find the money for whatever the banks and corporations want but when it comes to the people's needs, they have no money. But it is our money. Use our money to create jobs. I love to fight. It's my second, unpaid job: fighting. I'm proud to have all you people here to fight with me!"[5]

In 2010 Seattle Mayor Mike McGinn announced the city had won a coveted $20 million federal grant to invest in weatherization. The unglamorous work of insulating crawl spaces and attics had emerged as a silver bullet in a bleak economy – able to create jobs and shrink carbon footprint – and the announcement came with great fanfare.

McGinn had joined Vice President Joe Biden in the White House to make it. It came on the eve of Earth Day. It had heady goals: creating 2,000 living-wage jobs in Seattle and retrofitting 2,000 homes in poorer neighborhoods.

But more than a year later, Seattle's numbers are lackluster. As of last week, only three homes had been retrofitted and just 14 new jobs have emerged from the program. Many of the jobs are administrative, and not the entry-level pathways once dreamed of for low-income workers. Some people wonder if the original goals are now achievable.

"The jobs haven't surfaced yet," said Michael Woo, director of Got Green, a Seattle community organizing group focused on the environment and social justice.

"It's been a very slow and tedious process. It's almost painful, the number of meetings people have gone to. Those are the people who got jobs. There's been no real investment for the broader public."[6]