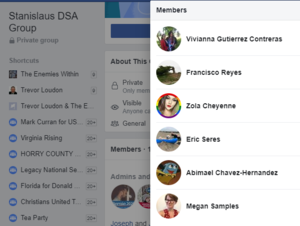 In 2019 Megan Samples stood from AD 21 for the California Democratic Party Central Committee.

Though I have always been interested in politics, I first became involved in the political process during the 2016 election cycle. After that election, I changed my major to political science because I felt it was important to educate myself on the power structures which impact my life on a daily basis.[1]