Cantu was born Mauro Casiano Cantú, Jr. on April 2, 1937 in the San Antonio apartment of his parents, Mauro Cantú and Lucrecia CasianoLink title. Cantú, the oldest of four children, was first called “Mario” by his schoolteachers. As a child, he helped out at the family business, a small 24-hour grocery store on the West Side called the M. Cantu Super Mercado. After graduating from Tech High School, Cantú married his first wife at age 19 and worked at the family grocery full time. Several years later he convinced his father to turn the store into a restaurant. Mario’s Restaurant became one of San Antonio’s most popular Mexican-food establishments.

He was first arrested at the age of fourteen, when, because he wanted to learn to be a writer, he stole a typewriter from an office near the grocery store. His debut onto police blotters led to his enrollment in a program for juvenile delinquents, headed and taught by a man named Damaso Hernandez, under whose tutelage Mario became conscious of the society and the culture that he would later exploit for both profitable and political purposes.[1]

In the early years of the restaurant business Cantú became involved in selling drugs, an action he later attributed to family difficulties. After a 1963 heroin run to Monterrey, Mexico, he was arrested and sentenced to six years in prison at Terra Haute, Indiana. While in prison, Cantú met several Puerto Rican nationalist political prisoners, and it was their influence and spirit that first made him interested in becoming a Chicano activist. In 1969 he returned to San Antonio and began organizing “Semana de la Raza” activities surrounding the Diez y Seis de Septiembre Mexican Independence Day. He also formed a committee to examine police brutality against Chicanos and founded Tu-Casa, an organization that helped undocumented migrant workers from Mexico to gain legal status in the U.S. He got involved in La Raza Unida Party and also worked to inform Americans about torture and injustice toward Mexican political prisoners.[2]

During this time, Cantú met and married his second wife, Irma Medellin, and his son Lucio Genaro Cantu was born. Mauro, Sr. died in 1975 and Mario took over the family restaurant business, which had become a gathering spot for San Antonio’s politically active Mexican Americans. In 1976 the Immigration and Naturalization Service (INS) raided the restaurant and arrested Cantú for employing illegal aliens. He became the first American ever convicted of this offense and was sentenced to five years probation. During the trial, he formed the Mario Cantu Defense Committee to seek the support of those who felt that he was being wrongly persecuted.[3]

When Mexican president Luis Echeverría visited San Antonio in 1976, other Mexican American leaders flocked to his entourage. Mario staged a demonstration, assailing el presidente as a CIA agent and asesino, or murderer, because of the killings of student protesters in Mexico City in 1968. Echeverría lunged at Mario's picket sign, denouncing the restaurant operator as a "fascist." The charge, like most of those by Mexican politicians of the time, was anything but true; Mario, who claimed descent from Lucio Blanco, a Tamualipas hero who implemented Mexico's first agrarian reform, was at least as much a part of Mexico's revolutionary family as Echeverría himself.[4] 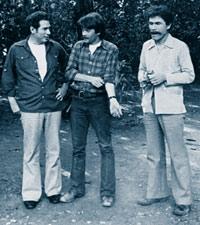 Cantú then turned his sights to Mexico in his fight for civil rights justice. He became close friends with Florencio “Güero” Medrano Mederos, a guerrilla organizer and chief figure in the Partido Proletario Unido de America. The party’s function was to arm peasants so that they could seize land back from the Mexican government. Cantú made several trips to Mexico to meet with Medrano and the PPUA. In October 1978 he traveled to Oaxaca to assist with a peasant land take-over and acted as a liaison between journalist Dick J. Reavis, NBC News (who was to film the event), and the PPUA. Soon after, Cantú was summoned to appear before the court to explain this probation violation. Instead of appearing in court, he chose self-exile and spent the next year in Europe. Cantú traveled between France, Germany, and Spain, where he spoke out against injustices toward the people of Mexico. He returned to San Antonio in late 1979, faced a probation revocation hearing, and served the rest of his sentence in a correctional halfway house.[5]

By 1976 Mario Cantu was secretly aiding Florencio "Güero" Medrano, an unlettered peasant trained for revolution in China who was trying to start an uprising near Oaxaca. Among other things, the Alamo City restaurateur had procured a convertible and filled its trunk with M1 carbines. He dressed a waitress in a wedding gown, painted "Just Married" on the car, and drove to Mexico City, confident that border guards would not molest newlyweds on honeymoon.

In 1978, he appeared on television as part of a peasant uprising that Medrano led. Probation authorities scheduled a hearing and Cantu fled to Paris. During his self-exile, public sympathy built for his defense. Archbishop Patrick Flores had spoken for him in a letter to the presiding judge, and Mario engaged leftist lawyer William Kunstler of New York to prepare his defense. When he returned some fourteen months later, the judge sentenced him to a mere six months in a halfway house.[6]

During Cantu's stay in Paris, Medrano was killed by Mexican pistoleros. Rebel Cantú was left without a cause. Within a year, he was enraptured by a scenario in which the United States—an imperialist power inside its own borders, in his view—was brought to its financial knees by the looming traffic in illegal drugs. "Cocaine is Latin America's atomic bomb," he told Dick J. Reavis.

Mario's observation, now being put to test by Colombian guerrillas, was critical to him in ways that his friends, me included, were too fearful to recognize. The plain truth was that Mario probably never gave up smuggling. If it had been heroin during the sixties, it had become marijuana during the seventies, and it became cocaine during the subsequent decade. A Colombian, he later told Reavis, had come to San Antonio to recruit him for the trade, bringing with him two kilos of coke, a sample of his product line. The agreement, was to extend the market to France. Cantu returned to Paris, where he opened Mario's Papa Maya Restaurant, a place so hip that a French gastronomic society created the Golden Tortilla Award in order to bestow honor on a foreign cuisine. While in Paris this time, if Cantu did not distribute cocaine, he consumed it—too much of it, a kilo during a single month, he confessed. The thirty-day rush melded the wires in his brain, though in a way consistent with his genius for imagining things. French mental health authorities pried him from the second-story room where he lived, but the always-daring Mario Cantu escaped from the asylum where they had put him away.[7]

After completion of his sentence, Cantú planned to abandon his political activism and focus on his restaurant business (although in 1984 he did join the hunger strike of Leonard Peltier and others to protest unjust and inhumane prison conditions). He and his brother Hector owned several other restaurants in San Antonio. In 1985 Cantú brought Tex-Mex food to Paris when he and third wife, Teresa Gonzales, opened Papa Maya. This successful café was awarded Best Foreign Food Restaurant by France's prestigious Comité Internationale d’Action Gastronomique et Touristique. For a time in the mid-1990s he moved to New Jersey to open Adelita’s, a restaurant he ran with his daughter and son-in-law. Cantú also continued to organize community events and involve himself in various business ventures in San Antonio. Mario Cantú passed away November 9, 2000 in San Antonio at the age of 63.[8]

Eschewing Karl Marx and the Magón brothers, precursors of the 1910 revolutionaries, Mario became a follower of the inscrutable Teilhard de Chardin, a controversial Jesuit theologian. He saw spiritual signs everywhere. Time and place were no longer exclusive in the physics that he pursued: Jesus had been crucified in Jerusalem, yes, but also on the site where the old Mario's had stood. When the pope visited Cuba, Mario had to make his way to Havana because the Holy Father had, of course, chosen the venue to meet with him.[9]

“San Antonio, Texas—The first mass rally and dance for Angela Davis in the Southwest was a smashing success here May 23 as some 1,500 persons attended.

“David Poindexter, main speaker of the evening, termed the rally and dance the most successful he had yet seen.

“Poindexter dealt with the August 7 shoot-out at the Marin County Courthouse, used as the excuse for Angela Davis’ subsequent imprisonment. He said Davis ‘didn’t know about Jonathan Jackson’s attempt; didn’t give Jonathan any guns; and had she known, she would have stopped Jonathan. Angela knew that the only defense we have is organizing people.’