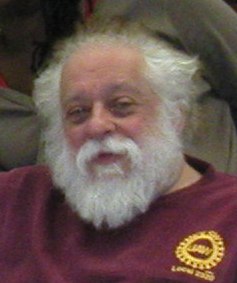 Jeff Segal is a founding member of National Organization of Legal Service Workers. He wrote NOLSW's original constitution and bylaws and chaired the founding convention. Over more than 30 years of active membership, Segal has served as an officer including, chairperson, secretary, and treasurer in two local bargaining units. He has been a member of numerous bargaining teams, handled grievances, organized local activities and actions, and lobbied for increased funding for Legal Services.

Jeff Jeff Segal has served as the Southeast Region as its Vice President for more than 20 years working with national staff to build NOLSW's presence in the South; and as a national officer has been the chief of the Trustees, who along with the other two Trustees is responsible for the auditing of the national books twice a year. He is a local community and national activisit for more than 40 years and a member of the Steering Committee of the National Lawyer's Guild's Miliatary Law Task Force of many years.

Segal was a staff attorney with the Legal Aid Society in Louisville, KY, from 1980 until he retired at the end of 2008. He continues to be an active NOLSW/UAW Local 2320 as a retiree.[1]

In 1968, the editorial group of The Movement-a newspaper affiliated with the Student Non-Violent Coordinating Committee and the Students for a Democratic Society, consisted of[2];

After the Conference of Socialist Youth in March 1964, it was decided to hold the next convention in Chicago, and there form a new national youth organization. The Coordinating Committee determined to switch the meeting place to San Francisco, however, and to hold it on June 19 through 21, 1964. The New organization was named the W.E.B. DuBois Clubs of America and would serve as the youth wing of the Communist Party USA.

Those who signed the “call” for this June 1964 convention, as set forth on page 15 of The Convener No. 4, included Jeff Segal, a Student Body President of Roosevelt University, Illinois.[3]