Ignacio De La Fuente has served as International Vice President of Area 3 of the Glass, Molders, Pottery Workers Union, since 1983, when he was named by International President James E. Rankin. He also serves as the President of the City Council in Oakland, California.

He and his wife, Elvia, have one son, one daughter and one grandchild.[1]

In 1971, at age 21, he arrived in California from Mexico City on a tourist visa, broke and unable to speak English. One week later he met Elvia, his US-born wife-to-be, whom he married after a three-month courtship — a bond that made him eligible for citizenship.[2]

Ignacio De La Fuente entered the trade in 1973 at Macaulay Foundry in Berkeley California, and served on the Local 164B (Oakland CA) Executive Board from 1996 to 1997. He was elected Business Manager for Local 164B from 1978 until July 1987, when he was hired as an International Representative. He attended the West Virginia Molders Institute and the Wisconsin University Molders Institute.

On July 14-16 (probably 1984) The Coalition for a People's Convention "a broad grouping in the Bay Area", organized The People's Convention in order to "unite on and present a people's program to the DNC and to network the many local efforts to win people's power from around the country. Its purpose is to enhance local efforts and amplify them into a united voice and demonstration for reorienting our society away from military aggression and towards meeting the needs of all our people". 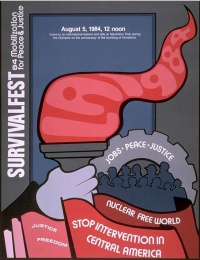 Co-chairs of the banquet were were Angela Davis and Ignacio de la Fuente of the Moulders Union.

The Conference on Perspectives for Democracy and Socialism in the 90s was the Committees of Correspondence's first national conference held in Berkeley, California July 17-19, 1992.[7]

Workshops that were held at the conference on Saturday, July 18 included:[8]

Strategy 1 What is an effective strategy? Responding to monopoly capital in the era of the permanent replacements (strikes, in-shop actions, community alliances, internation solidarity) 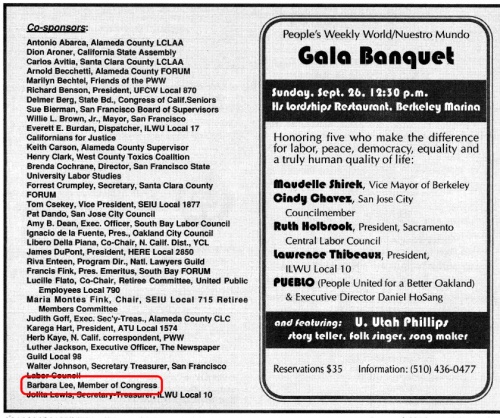 At the same time he was selling U.S. secrets to the Soviet Union, former FBI special agent Robert Hanssen was a key supervisor in a 1980s domestic-spying program questioning the loyalty of American citizens and monitoring their activities, FBI documents have shown. Under this program, federal agents filed reports on teachers, clerics and political activists who primarily were affiliated with liberal causes. There are four letters marked "Secret," and signed by then-labor organizer Ignacio de la Fuente, who was urging that the U.S. government lift a ban on union meetings with Eastern Bloc labor groups. These days, de la Fuente is president of the Oakland City Council. [12]