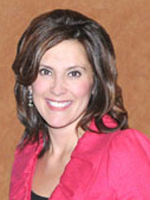 Template:TOCnestleft Gretchen Whitmer was first elected to the Michigan House of Representatives in 2000. She is the Democratic vice chair of the House Appropriations Committee and serves on the House Fiscal Agency Governing Committee and the following appropriations subcommittees: community health, economic development, higher education, fiscal oversight, and capital outlay.

After serving in the State House for six years, Gretchen Whitmer won a seat in the State Senate with 70% of the vote in the 2006 general election. The East Lansing-based district is heavily Democratic, and she won the primary with an 85% majority.

Support from Onward Together

Onward Together supported Gretchen Whitmer as a candidate for the 2018 midterm elections.[1]

Prior to her election to the legislature, Whitmer was a corporate litigator in Lansing specializing in administrative and regulatory law. She practiced administrative law before the Ingham County Circuit Court and the Michigan Public Service Commission. Whitmer has also completed internships with the Office of Ingham County Prosecutor Stuart Dunnings III; Anna Diggs Taylor, Chief Judge, U.S. District Court for the Eastern District of Michigan; and the Michigan State AFL-CIO. Prior to attending law school, Whitmer also worked as a policy analyst for the House Democratic Policy Staff.[2]

Whitmer is a member of the State Bar of Michigan, the Ingham County Bar Association, the House Democratic Women’s Leadership Caucus, and the Women’s Economic Club.[3]

People for the American Way support

Sen. Whitmer opposed a ban on late-term abortion, a bill which prohibits illegal immigrants from obtaining drivers licenses, and an education budget sharply criticized by teachers’ unions, while supporting renewable energy development and an increase in the minimum wage. She has participated in panels regarding women’s health issues, and while a member of the State House, writes the Associated Press, she attempted to a block “health-care professionals from refusing to provide emergency contraception.” In 2004, she won the “Ray of Light Award” from the gay-rights youth group PRISM for her support for the LGBT community.

According to her answers of a 2004 Project Vote Smart survey, Sen. Whitmer asserts that she is an advocate of affirmative action, expanded anti-discrimination laws, and reforming the criminal justice system to emphasize rehabilitation and prevention over incarceration. Moreover, she is an opponent of vouchers, abstinence-only education, and an attempt to “restrict marriage to a union only between a man and a woman.”[6]

The promise of fresh statewide leadership for the new year ahead whipped up a celebratory mood Tuesday December 2018 night at the inauguration party for Gov. Gretchen Whitmer at Cobo Center.

More than 2,500 supporters attended the black-tie event inside the Grand Riverview Ballroom, many dressed in tuxedos and long gowns, vying for a chance to see, talk or take a photo with Whitmer and the throngs of national and local politicians who came out for the event.

Around 8:30 p.m., Whitmer took the stage and thanked the crowd for their support and their work toward getting her elected. She spoke for about one minute.

"Alright, Detroit. Alright, Michigan. I want to thank you — thank you for being a part of this," Whitmer said.

"We want leadership that creates opportunity for all of us," Whitmer told the jubilant crowd. "Let's have some fun tonight and tomorrowlet's roll up our sleeves and fix the damn roads."

Whitmer thanked Detroit Mayor Mike Duggan for delivering Detroit and being a partner to her.

"I am going to be a partner to you," Whitmer told Duggan.

Duggan said 180,000 Detroiters voted for her and Gilchrist.

“Governor I know Lansing is your home, but I hope Detroit is where your heart is going to be,” Duggan told Whitmer.

Robert Roscoe and his friend Charmaine Kennedy were among the attendees to get Whitmer's attention for a photo early in the evening.

Roscoe, a precinct delegate and school board member from Eastpointe who was in one of Whitmer's TV campaign commercials, said Whitmer is the most approachable governor he has ever met.

"She is a woman of her word. I really think she is going to fix the roads," Roscoe said.

Miranda Reynolds was excited to be attending the celebration after working as a volunteer on Whitmer's campaign last year as a college student at Michigan State University. Reynolds and her father grinned ear-to-ear as they posed for a photograph before heading into the party.

"She is such a strong female. I like everything she stands for," The Brighton resident said.

"I'm here," Gregory Reynolds said, "because this is my daughter's dream come true to be here."

David Hecker, president of the American Federation of Teachers Michigan chapter, attended the celebration with his wife Alice Audie-Figueroa, after attending Whitmer's swearing in ceremony in Lansing Tuesday morning. He said it was important to celebrate the new leadership coming into the state.

"We have a lot to do concerning a number of issues. In public education we have an awful lot to do," Hecker said. "The last eight years have not been kind to public education as far as state policy goes. We are looking forward to working with Gov. Whitmer and leadership in the House and Senate to turn things around."

Lorraine Richmond of Detroit said she had two reasons to attend Tuesday's ball: To celebrate Whitmer and watch as her 17-year-old son performed as a drummer with the Detroit Symphony Orchestra.

"I'm also here to see about the change we are embarking upon in the state of Michigan. It was a win-win," Richmond said.

Earlier in the day at her swearing in ceremony in Lansing, Whitmer called for compromise and cooperation among Michigan officials after becoming the state’s 49th governor and the leader of a divided government.

“We might live in divisive times, but Michigan’s problems are not partisan,” the East Lansing Democrat said from the Capitol steps Tuesday, before twice repeating: “None of us can afford to compromise Michigan’s economic future because we won’t compromise with one another.”

The former Senate minority leader promised to be “a governor for everyone” just before noon New Year’s Day. Whitmer won Wayne, Macomb and Oakland counties on her way to a 9 percentage point victory.[7]