Clare Curran is a New Zealand Member of Parliament. She is currently the Labour Party spokesperson for Broadcasting, Communications and Information Technology, Disability Issues and Open Government.[1]

Curran grew up in Dunedin, went to school, started her first jobs and went to university there.

Clare Curran in the Australian Left Review (No. 134, November 1991 ) interviewed with six authors, on the topic of the trade union/government Accord.[5] 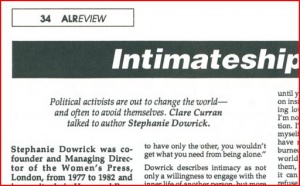 Australian Left Review was a monthly journal published from 1966 to 1993 by the Communist Party of Australia. It covered areas of left wing politics, industrial relations, human rights and the environment. The precursor was the Communist Review 1934-1966. During 1992-3 it was published as ALR Magazine.[6]

Curran served on ALR's editial collective in 1992, and contributed regular articles to the publication.[7]

Social Change Media is not just another marketing agency; we specialise in designing and managing campaigns for public sector and non-profit organisations that have a behaviour change focus.

It has published a couple of titles by Sydney university academic, Frank Stilwell, who in 1991 was president of the shortlived New Left Party.

1999 - the ACTU's media officer Clare Curran say she plans to compile a sector-by-sector analysis of the issues to develop theme's for the Work/Time/Life campaign which has been endorsed by the ACTU executive.

In respect of the Ministry's knowledge of Ms Curran, on the basis of Ms Curran's records, she had sent an email to the General Manager, Working with Central Government on 15 April 2003, advising him of her background and her willingness to do consulting work for the Ministry. This was one of a number of approaches to potential clients that Ms Curran made at that time promoting the business she had established following her return from Australia in 2002. The timing of the approach to the Ministry is earlier than the timing of late 2005/early 2006, indicated in the State Services Commission's report to the Minister for the Environment of 19 November 2007, and reflects the subsequent opportunity that the Commission has had to talk to Ms Curran and access her records.

She said she was a ‘‘proud EPMU member’’ and had worked in or for the union movement in Australia and New Zealand for the past 20 years.

In October 2007, EPMU President Don Pryde threw his hat in the ring for the Dunedin South seat and has the full backing of his union. Having met Don at a conference a few years ago I’ve got to say I was taken by his level-headedness and the way he’d think before passing comment on anything - definitely a safe pair of hands. I can only assume that this is a clear sign that NZLP council member Clare Curran’s candidacy was designed solely to open the debate as she’s a personal friend of EPMU National Sec Andrew Little and was the strategic talent behind that union’s ground breaking Fair Share campaign so it’s unlikely Little would endorse a candidate against her if her candidacy was serious.

In 2008. The Otago Daily Times reported union backing for the Dunedin South nomination is split between two candidates who both claim wide community support Labour Party elected official Clare Curran, who has worked for the Australian Council of Trade Unions, and Engineering, Printing and Manufacturing Union president Don Pryde.

The Otago Daily Times understands Ms Curran has the support of the Service Workers Union and the Rail and Maritime Transport Union. It was not known if the Meatworkers Union was supporting a candidate.

Curran is presently the Otago-Southland representative on the party’s executive and, ironically, has thrown her hat in the ring to stand against David Benson-Pope in Dunedin South after he was forced out of Cabinet.

Clare Curran also used to be the media officer for the University of Otago.