Athens YDSA is the Athens Georgia affiliate of Young Democratic Socialists of America.

The Athens chapter of the Young Democratic Socialists of America held its first meeting on Thursday, Aug. 23 2018, laying out goals to push for higher wages for professional full-time workers at the University of Georgia, building and educating a membership base, reaching out to local high schools and building coalitions. 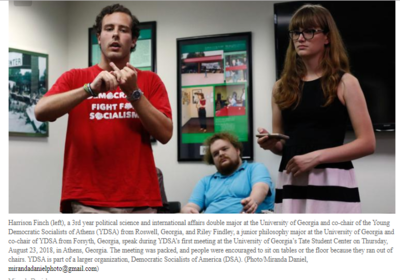 The meeting was held in the Tate Student Center and was comprised of approximately 30 students and Athens locals eager to be a part of YDSA.

Following these beliefs, Findley said the organization’s “main project” is focusing on getting higher wages or a living wage for professional full-time workers at UGA.

“To be clear, this will probably take more than one semester,” said Harrison Finch, co-chair of YDSA in Athens. “The president of UGA is very passionate about not raising wages.”

Findley and Finch also mentioned the Athens chapter of YDSA’s secondary goals: building and educating a membership base, reaching out to local high schools and building coalitions.

“We are planning on tabling and trying to get new members through the traditional methods that most clubs do,” Finch said. “We’re definitely actively trying to expand, but at the same time, I’ll take 50 committed people who are ready to go to war with [UGA President Jere] Morehead over 500 people who don’t care.”

YDSA in Athens plans to reach out to local high schools since the organization is open to not only UGA students but also to Athens locals under 30 years old.

The organization, according to Findley, wants to build coalitions with other organizations such as the Progressive Action Coalition, Students for Justice in Palestine and Young Democrats of UGA.

During the meeting, attendees voted to hold a training session to educate members on democratic socialism and to have a two-month interim period before officials are elected.

Citing the Democratic nomination victories of former Michigan House Rep. Rashida Tlaib to the U.S. House of Representatives and Alexandria Ocasio-Cortez in New York’s 14th Congressional District, members of YDSA in Athens expressed enthusiasm in the growth of democratic socialism in the U.S.

“There’s a lot of energy in this country. People are really excited about the hope and the freedom that socialism promises. The Democratic Socialists of America, just after Ocasio-Cortez won, has risen to now 50,000 members,” Findley said.

“If you look at Alexandria Ocasio-Cortez, if you look at her campaign, she says, ‘yes, she is a part of Democratic Socialists of America,’ but she doesn’t focus on that. She focuses on the fact that what she does lifts up support,” Webb said. “Through that, those people can then have a better life.”

Members of YDSA in Athens don’t want to be confused with the former democratic socialist UGA organization named Young Democratic Socialists at UGA, which was under fire in 2017 for a controversial tweet.

The tweet was a quote tweet of conservative activist and founder of right-wing campus group Turning Point USA Charlie Kirk, who linked to an article about a professor at the Art Institute of Washington saying House Republicans “should be lined up and shot.”

Young Democratic Socialists at UGA allegedly tweeted, “House Republicans should NOT be shot! They should be guillotined.”

UGA responded by saying UGA police were investigating the matter and the issue had been referred to the Office of Student Conduct. The organization’s page was later removed from the UGA Involvement Network, UGA’s list of official university organizations.

Finch said YDSA in Athens is “completely different and not affiliated with the past YDS.”

“We do not condone violence in any manner and we are in Athens instead of at University of Georgia because we believe the community deserves fair and equal treatment and representation,” Finch said.[1]