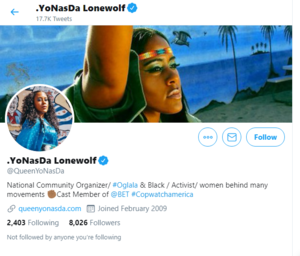 Yonasda Lonewolf is a hard left activist. She was active in the 2014 Ferguson Movement and the 2016 Standing Rock Movement.

She is the granddaughter[1] of Louis Farrakhan, leader of the Chicago-based Nation of Islam. Her mother was the late Wauneta Lone Wolf-Cox and her father was Theadius McCall, a Black American from Brooklyn, NY.[2]

YoNasDa (Yo-Naja- Ha) LoneWolf, born during the American Indian Movement & 1978's The Longest Walk in Washington, DC. She is Oglala Lakota and African American. Her late mother, an Oglala Lakota (Sioux) Wauneta Lonewolf was a renowned motivational speaker, substance abuse, gang prevention counselor and healer. Her father, who is African American, is a fine artist.

Queen YoNasDa is a living example of the saying “No Nation Can Rise Higher Than Its Woman”. Currently, she is a National Community Organizer/Human Rights Activist and a motivational speaker. Being self-driven she is living her divine calling from her early beginnings in the entertainment industry as a rap artist and choreographer for BET’S own Teen Summit to her most recent work as an active activist and a voice against any injustice that affects people worldwide. She has used entertainment to bring awareness on the condition of oppressed people whether it's releasing two albums and touring with Wutang Clan or performing at the Annual Gathering of Nations Pow Wow and Festival she walks in many cultural paths. 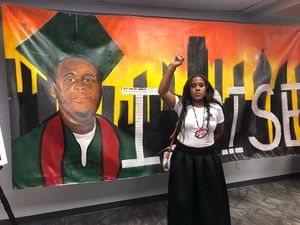 Dig a Little deeper in to her resume and you will find that Queen YoNasDa was the brainchild behind #BMoreYouthRise and the National Stop the Killing rallies and marches after two of her friends were killed by police brutality. She organized cities from Phoenix, AZ to Baltimore, MD and was asked by the family of Mike Brown Jr in Ferguson, MO to speak at his 1-year anniversary. Which her electrifying speech made it on all international media platforms and she was featured in Elle Magazine (France) as one of the women in the Stopping Police Brutality Movement that is changing America. When Queen YoNasDa is not protesting in the streets you can catch her speaking to college and high school students. She also was on the BET Rap it Up Tour, promoting sexual education. Since 2006, she has directed entertainment panel discussions at various colleges and universities and at the annual Nation of Islam conference called Saviors Day with over 100,000 people. This truth-teller is a published writer who has a weekly column in the Final Call Newspaper and is now bringing her artistry to the world with a children’s book called “The Adventures of Star Song” and a daily devotional book called “Journey 2 Peace”. She is also filming a docu- series based on connecting the simirlarties of people from all walks of life. She started a cultural tour called "Rez Tours "; which she opens cultural tours to Indigenous communities to learn more about the culture of Indigenous people. She has hosted a radio show on Chuck D Rapstation.com and Atlanta's "Voice of the People" radio. In October 2015 she was a special guest on NYC Power 105’s The Breakfast Club where she spoke on “Indigenous Peoples Day.” From the huge response she was asked to be on The Breakfast Club again in October and December 2016. She spearheaded a 32 and a 64 cities fundraising events called Hip Hop 4 Haiti, and Hip Hop 4 Flint in 2016. In September 2017 she started Hip Hop 4 Foundation and spearheaded 15 citiies for Hip Hop 4 The People after the devasting hurricane that hit Texas, Florida and the Carribean. YoNasDa was on the executive planning committee and co-convener for the 20th Anniversary of the Million Man March- Justice or Else! (along with Carmen Perez. She also accepted the invitation to be the National Co-Convener of the Women's March. Queen YoNasDa is a woman with a purpose of promoting love, justice and equality. 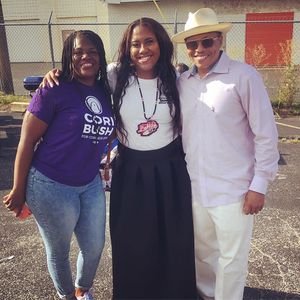 This is why we push our own into political positions if we wanna see a change. I am absolutely soooo proud of my sister in the movement @coribush she is now the 1st Black Congresswoman Cori Bush ✊🏾 she fought hard you can watch her story on @Netflix with Knock Down The House!! When I needed help when my friend Rumain Brisbon (Phoenix) was murdered by police in 2014 it was Cori that helped me. She helped me mobilize nationally to get the word out. She is such an amazing, loving person and she loves our people. I’m sooo proud of you sis!!"

I was born with my fist up,” Yonasda Lonewolf affirms.

Daughter of the late, Wauneta Lonewolf of the Ogalala Lakota tribe South Dakota, Yonasda, like her mother, is an activist, speaker and community organizer. In addition, her mother was a public relations speaker and former public relations director for Muhammad Ali in the 1970s. She was among the thousands of Indians and supporters to participate in The Longest Walk from Alcatraz Island to Washington D.C. from February to July 1978. The spiritual walk was in protest of the government’s threat of the tribal sovereignty and 11 anti-Indian legislation that would affect water rights and treaties.

“My mother was pregnant with me so I was the only girl born during The Longest Walk. She ended up having me in Washington D.C. once we got there,” Lonewolf shares with EBONY.com. “I was born into this movement, I was born with my fist up out of the womb. My mother was a person who fought and spoke the truth on behalf of unity. She really wanted unity among all nationalities.”

Lonewolf, 38, is an African American and Native American woman, who uses her voice and visibility to bring attention to important issues that impact both cultures with a sharp focus on police brutality. She has been instrumental in organizing events such as Hip Hop 4 Haiti, Hip Hop 4 Flint, and was invited to be the speaker at the anniversary of Michael Brown’s death in Ferguson, Missouri.

“Anytime I see any type of injustice, I am there because I just really feel that we are at a time right now where it’s good vs. evil. You have to choose which side of history you want to be on. I want to be the warrior like my ancestors were,” she said. For her powerful voice, work and presence, The Standing Rock Sioux Tribe in North Dakota reached out to Lonewolf to help bring awareness to the Dakota Access Pipeline (DAPL), an underground oil pipeline that would be routed from North Dakota through Illinois, and could affect the reservation’s water supply. She arrived at Standing Rock in September to protest in solidarity with water protectors. The final construction permit has since been denied by the Obama Administration.

Ebony.com spoke with the Lonewolf about her experience in Standing Rock and the message behind her activism.

EBONY.com: How have the protests against DAPL impacted you?

Yonasda Lonewolf: This really hits home for me because Standing Rock is my sister tribe and the land that the DAPL is on, the treaty land, is owned by my people. The Lakota people. So, I love that Standing Rock Sioux Tribe and all of the other nations are standing up to say, “You’re going to honor our treaty.”

EBONY: What were some situations that you’ve witnessed in Standing Rock?

YL: If you ever go to Standing Rock reservation, it is so beautiful. It is a long river and it’s so beautiful to see. Then right up the hill, you see all of this construction happening. All of them leveling out [this] beautiful land into mud, into dirt! It’s just so horrific to see. It doesn’t look like it’s appropriate.

EBONY.com: How was the energy around Camp Ociti Sakowin when Trump won?

YL: One thing that one of the tribal elders that I speak to all the time says, “You know, it’s probably good that Trump got elected because it wakes us all up. We’re about to change the world even quicker now than ever before because we don’t want him in office.” I always said, the only time that God is about to bless you is when there is a change in your life. You have to be able to acknowledge and accept change.

EBONY.com: You once said, “It’s not easy walking two roads within two great nationals of the black and red.” What are your feelings on seeing both of your cultures currently fighting injustices?

YL: When I look at myself being Black and Native, it’s so frustrating at times when I’m at these Black leadership conferences and the same problems they’re saying we have, the same stuff happens in the Native community. We are in a fight right now where we cannot segregate our issues anymore. Black lives do matter, Native lives do matter! These individual people of color lives matter but in order for us to really make a change for it to really be effective, we have to unify. We need to start speaking together as such and stop segregating ourselves as our common oppressor has taught us to.

Learn more about Standing Rock in this EBONY essay; and follow Yonasda’s movement. 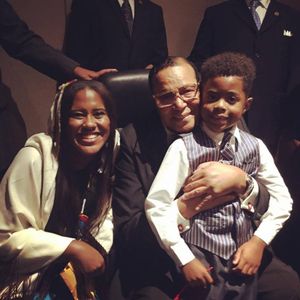 I love Farrakhan!!!!!! The reason why he is the most respected and most feared Black leader in the world its because of his mighty teacher the Hon. Elijah Muhammad. He ALWAYS acknowledge what his teacher has taught and guided him.

Now what kills me is that many of YOU all are NOT doing the same with Farrakhan.

I don't care how you "dress up" your ideas give the props to Farrakhan!!! He said he is looking for 10,000 fearless to clean up the communities and to go into the communities without guns but with love. He said buy out our communities. He said turn your neighborhood into a food oasis. He said he wants to establish our own political party "The Justice Party". He has given us the blueprint for all oppressed people so as you are carrying out what you heard him say put some respect on Farrakhan's name.

There was probably many times where The Hon.Minister Louis Farrakhan could've said "I am the one and only" but he never did. He always acknowledged his teacher the Hon.Elijah Muhammad and Master Fard Muhammad.

Put down your ego and pride and do the same! #farrakhanisthetruth