From KeyWiki
Jump to navigation Jump to search
The printable version is no longer supported and may have rendering errors. Please update your browser bookmarks and please use the default browser print function instead. 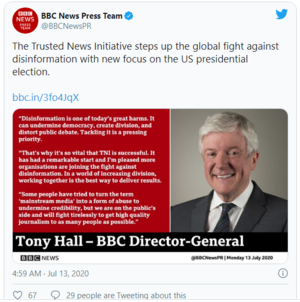 Trusted News Initiative is a left-wing scheme among large media outlets to control the narrative on presidential elections across the globe, including the 2020 Presidential election between President Donald Trump and Joe Biden in America. Specifically, the Trusted News Initiative meddled in the UK 2019 General Election and the Taiwan 2020 General Election.

The Trusted News Initiative also worked on silencing "disinformation" about the Wuhan coronavirus.

The project was launched during the BBC's Trusted News Summit in Summer of 2019.

Trusted News Initiative Director Jessica Cecil explains in a blog post dated 8 October 2020[1] at the BBC how big tech schemed with the mainstream media to "alert each other to the most dangerous false stories, and stop them spreading fast across the internet, preventing them from doing real world harm?":

"A year ago the BBC convened partners across the world in an urgent challenge: at times of highest jeopardy, when elections or lives are at stake, we asked, is there a way that the world’s biggest tech platforms - from Google, YouTube, Facebook and Instagram to Twitter and Microsoft and major news organisations and others - from the European Broadcasting Union, the Wall Street Journal and The Hindu to Reuters, AFP, The Financial Times, CBC/Radio-Canada, First Draft, The Reuters Institute for the Study of Journalism - can alert each other to the most dangerous false stories, and stop them spreading fast across the internet, preventing them from doing real world harm?

Jessica Cecil further explains how the Trusted News Initiative controls the narrative on elections across the globe:

"We have been sharing alerts over Covid-19, and before that, over falsities which posed a threat to democratic integrity during the UK and Taiwan Elections. And now we are sharing alerts over the most serious disinformation in two very different elections - in the US and in Myanmar. And because different news organisations are most relevant in different regions, we are working with a wide and expanding group of publishers. In the US we are also working with the Washington Post, AP and the LA Times."

Project Origin is a project of Trusted News Initiative[2] described as "verification technology which will tag content in order to identify when it has been manipulated."

“We’ve forged a close relationship with the BBC and other partners on Project Origin, aimed at methods and standards for end-to-end authentication of news and information.

The New York Times was a part of a coalition leading the Trusted News Initiative, (TNI) which was devised as "a shared early warning system of rapid alerts to combat the spread of disinformation during the upcoming U.S. Presidential election."[4]

In the month leading to polling day, TNI partners will alert each other to disinformation that poses an immediate threat to life or to the integrity of the election so that content can be reviewed promptly by platforms, while publishers ensure they don’t unwittingly republish dangerous falsehoods. The alerts will also flag content that undermines trust in TNI partners by identifying imposter or manipulated content that purport to come from trusted news brands. To achieve this, TNI will deploy verification technology, called Project Origin, led by a coalition of the BBC, CBC/Radio-Canada, Microsoft and The New York Times, wherein a digital watermark is attached to media originating from authentic content creators, and can provide an automated signal warning of manipulated or fake media.

Tony Hall, director-general of the BBC, said: “Disinformation is one of today’s great harms. It can undermine democracy, create division and distort public debate. Tackling it is a pressing priority.”

“That’s why it is so vital that TNI is successful. It has had a remarkable start and I’m pleased more organizations are joining the fight against disinformation. In a world of increasing division, working together is the best way to deliver results.”