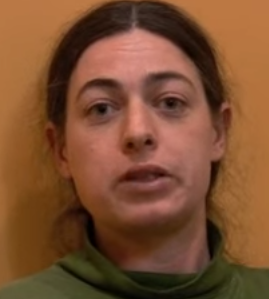 Thistle Parker-Hartog was raised in Oregon and lives in Minneapolis with her partner and two children, ages 2 and 4.

In February 2000, Colombian human rights activist, Maria Hernandez visited several cities across the U.S., to give a first-hand account of the true story behind the U.S. drug war in Colombia. Her speaking tour comes on the heels of several national, grassroots initiatives to block President Clinton's proposal for $1.3 billion in new military aid to Colombia.

A statement circulated by the Twin Cities Anti-War Committee and Chicago's Colombia Solidarity Committee says in part, "U.S. military aid ... is used by militaries and paramilitaries to terrorize anyone who speaks out for workers, peasants, and basic human rights. In 1999, the U.S. government sent $289 million in military aid to Colombia, resulting in the murder, torture, and kidnapping of over a thousand of Colombian people."

On November 17, 40 local anti-war activist came together at the Minneapolis Federal Building to protest U.S. military aid to Colombia. This protest organized by the CISPES Anti-war Committee targeted congress's proposed increase of the Colombian aid package to 1.5 billion dollars.

Thistle Parker-Hartog from the Anti-War Committee said, "The Clinton administration and the military-industrial complex has teamed up with Colombia's government and their paramilitary death squads to destroy Colombia's leftist movement and leaders, and to pave the way for big business." Protesters agreed, chanting, "Not a penny, not a dollar, we won¹t pay for death squad slaughter!"[1]

Meredith Aby-Keirstead writing August 9, 2004. For two weeks in July, a solidarity delegation of the Colombia Action Network (CAN) traveled in Colombia, meeting with leading trade unionists, peasant leaders and other participants in that country’s powerful movement for justice and liberation.

The CAN delegation was made up of anti-war and student activists from Illinois, Minnesota and Connecticut. The delegation investigated the impact of U.S. military aid through Plan Colombia and extended solidarity to the struggle of the Colombian people against U.S. imperialism.

The CAN delegation met with representatives from the unions leading the labor movement in Colombia, including the CUT, Colombia's largest labor federation; USO, the oil workers’ union; the Bogotá teachers' union and SINALTRAINAL, the beverage workers’ union which has been fighting at Coca-Cola plants.

Another union fighting for the right to organize is SINALTRAINAL, the beverage workers union. Since 2002, the Colombia Action Network has been organizing in solidarity with this union. Last summer the CAN joined the international campaign for a boycott of all Coca-Cola products for their union-busting tactics, including Coca-Cola’s support of right-wing paramilitary death squads. Vice-president William Mendoza informed the delegation that the movement in the U.S. has helped. He said, "We’ve felt international solidarity and the pressure has decreased the threats to us. The company has had to give some means of security to us because of the international pressure. It’s because of this that we can continue our struggle."

Matt Muchowski, a student activist from DePaul University who is organizing the effort to kick Coke off his campus, explained, "The paramilitaries are open in their support of the multi-national corporations and there’s been even a magazine article which described a meeting between the paramilitaries and Coca-Cola. I take this to be further proof that corporations such as Coca-Cola work against democracy and human rights. I will take this information and the contacts I’ve made here with SINALTRAINAL back to Chicago to continue to fight for workplace and student democracy."

While traveling in the northern Colombian states of Antioquia and Arauca, members of the delegation talked with campesinos about how the fumigation chemicals that are purchased with U.S. military aid kill legal crops in along with coca.

Thistle Parker-Hartog from the Anti-War Committee in Minneapolis, Minnesota explained, "It’s important for people in the U.S. to understand the conditions Colombian campesinos face every day. Most of these farmers have no connection to the armed struggle and are merely trying to work enough to support their families and create a stronger community. The U.S.-funded Colombian military and paramilitary bring terror and intimidation into their streets and into their very homes. I hope that North Americans will be moved by the poignant stories from our delegation to take political action to stop the Plan Colombia policies which are impacting these campesinos."[2]

Parker-Hartog traveled to El Salvador where she aided CISPES in constructing a church/community center and monitoring the 1994 elections. After moving to Minnesota , she continued to work with CISPES around issues of immigrant justice, and helped form the Anti-War Committee in 1998. In that capacity, she has worked to end U.S. wars and aggression abroad. She traveled to Colombia and met with union leaders, activists, and indigenous leaders who have been struggling to survive and make progressive change in the face of repression from their own government, a repression fueled by her government. [3]

Circa September 19, 2009, Thistle Parker-Hartog signed a petition initiated by the Minnesota Coalition for a People’s Bailout entitled, Petition to Demand a People's Bailout which includes the statement, "Tax the rich, make them pay for their crisis!"[4]

On September 24 the F.B.I. raided the homes of twelve leftist activists across the U.S.A. looking for links to foreign terrorist organizations. Thistle Parker-Hartog was one of those whose home was raided and who is being investigated by the FBI.[3]