Sunrise Movement is affiliated to Justice Democrats and to Data for Progress.

Sara Blazevic, 26, draws a direct line between Occupy Wall Street and the Sunrise Movement, the youth-led environmental organization she cofounded and now helps lead as managing director. Last year the group put the Green New Deal (GND) on the political map by embracing bold and visionary tactics. Sunrise engages in civil disobedience to push Democrats to promote solutions that actually match the scale of the climate crisis (it didn’t hurt when AOC dropped by their sit-in at House Speaker Nancy Pelosi’s office to offer her support) and backs political candidates who are already onboard with the cause. They call this dual approach building “people power” and “political power.”

Blazevic grew up in Manhattan, and had just left for her first semester at Swarthmore College when Occupy erupted. She recalled sitting glued to the livestream, and visited Occupy Wall Street during her October break. Blazevic eventually became involved in Occupy Philadelphia and the Occupy group on her campus.

“Occupy gave me this sense of limitless possibility around scale and decentralization, and this sense that it is really possible for social movements to go viral in this way and to penetrate everyone’s lives and consciousness,” Blazevic told Teen Vogue. It also showed her that people want to be part of a cause and feel that they are part of something meaningful.

Blazevic had her criticisms of Occupy too. The movement’s lack of concrete demands and radical openness (which wasn’t always effective, and could be downright chaotic) made her crave a more disciplined, strategic form of organizing. But now that Sunrise has gone through its own viral moment and is strategizing for the year ahead, she and her collaborators find themselves thinking about Occupy more and more. No matter who wins the White House in 2020, Sunrise knows there will need to be a nationwide popular revolt. The masses will need to take to the streets demanding a GND or it will never happen. Blazevic, for one, thinks there’s something still to be learned from Occupy’s simplicity and how it galvanized all kinds of people to take action.[1]

Sunrise is going on a speaking tour again this Spring! Our trained Speakers will talk to thousands of young people about climate change, why it's happening, and how we can link arms across this nation to stop it together.

If you know HS teachers, professors, pastors, community leaders, or friends who can connect us to these kinds of people in these five states - tag them here/have them fill out the form (https://www.sunrisemovement.org/host/). Hit me up if you have questions/ideas! — with Alex Mijares, Tiffanie Jeffreys, Garrett Blad and Dyanna Jaye.

UPDATE: the 51 Sunrisers arrested at Nancy Pelosi's office have been released. We would like to thank them for their sacrifice, for holding their ground, and making sure our voices were heard. — with Cody Jay Purchase, Hope Kogod, Lauren Maunus, Emerson Michael Skufca, Jasper Baldwin, Arjun Jayaraman and Shelby Krohn.

Just hours ago, these 8 brave youth were released from NY 7th Precinct after Governor Cuomo had them arrested. Today was his last chance to pledge #NoFossilFuelMoney and he's made his choice clear: he will protect Big Oil over our futures once again. Donate today to help us take on politicians like Cuomo in 2018. http://bit.ly/cuomo-reject-fossil-fuel-money — with Gabriel Reichler, Elise Ferguson, Sara Blazevic, Victoria Fernandez and Miles Goodrich.

We did it! We just wrapped a powerful, inspiring week together with seventy new #SunriseSemester2018 fellows. We shared stories, learned the skills and craft of organizing, and built relationships that will serve us for years to come. Now, fellows are off to Michigan, New York, Pennsylvania, Florida, and Minnesota to build the youth army in 2018. 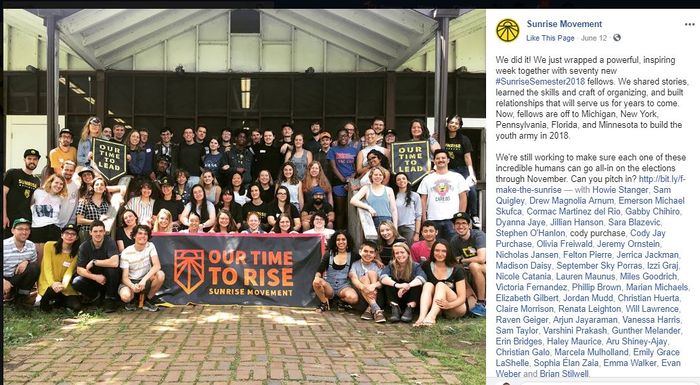 “I founded Sunrise Movement last year in order to kick out corrupt politicians backed by Big Oil and elect a new generation of leaders who will fight for my generation. Last night was bittersweet. Young people voted in record numbers, many supporting visionary campaigns that imagined a more just and fair America that takes the climate crisis seriously. In fact, 19 of the 34 new House Democrats won without a dime of money from fossil fuel CEOs and lobbyists. This is unprecedented and should be celebrated. Still, our political system continues to be rigged in favor of the rich and powerful who spent hundreds of millions of dollars to block candidates and ballot measures that threatened their profits.

“To Pelosi and the new Democratic leadership in the House: we hear you have no plan to combat climate change. This is unforgivable. Our generation will no longer tolerate empty promises or words without action. We’re not expecting miracles; we understand the GOP is corrupted by dirty oil money and will stall us at every turn. We know that sweeping change isn’t possible until Trump is gone — but we need to start laying the groundwork now. We’re asking Pelosi and Democratic leaders to take up this fight alongside us, or step aside and make way for new leadership who will.”

Moments ago, newly-elected Alexandria Ocasio-Cortez, the youngest Congresswoman in history, joined us at Speaker Pelosi’s office to help us change the course of the Democratic Party and give our generation a shot at a livable future. 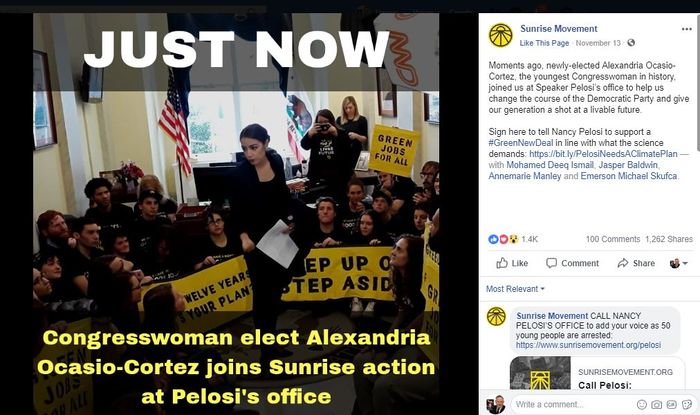 Sign here to tell Nancy Pelosi to support a #GreenNewDeal in line with what the science demands: https://bit.ly/PelosiNeedsAClimatePlan — with Mohamed Deeq Ismail, Jasper Baldwin, Annemarie Manley and Emerson Michael Skufca.

From the Sunrise Movement:[3] 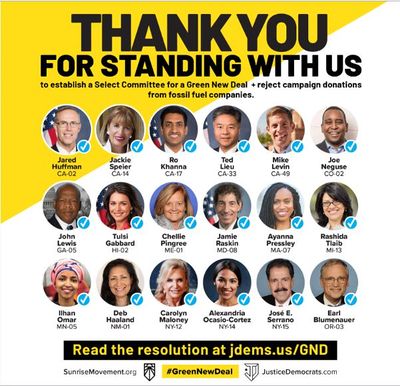 Alexandria Ocasio-Cortez has released a proposal for a Select Committee on a Green New Deal, a plan that would transform our economy and society at the scale needed to stop the climate crisis.

We have the momentum to make a Green New Deal real, but we need a critical mass of Congresspeople to support the proposal.

Take action on Dec. 10 to show Congress the Green New Deal is a top priority.

Partners in support of the Green New Deal 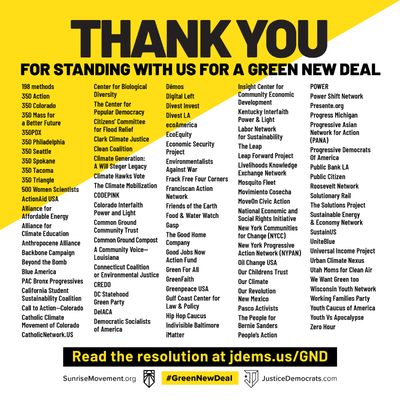