When Dr. Sherry Luck saw that there were few community-based services for South Side residents with HIV/AIDS, she decided to provide them herself--and for the first three years, she did so at her own expense.

Luck, who founded and directed the HIV/AIDS unit at Roseland Community Hospital in 1994, and who also saw patients at two medical offices, linked her role as a physician with her commitment to the community, her friends said.

"She took it upon herself to investigate the treatments and to become one of the leaders of care for individuals with HIV," said Oliver Krage, president and chief executive officer for Roseland Community Hospital. "Using the latest pharmaceutical agents, she was able to help people lead much more healthy lives. Her life was caring for people."

Dr. Luck, 44, who lived in the Lake Meadows community on the South Side, was found May 1999, in her bed. She had died of an enlarged heart.

Dr. Luck was born in Crawford County, Ala., and raised in Columbus, Ga. She graduated from Howard University's School of Medicine in Washington, D.C., in 1981 and served her residency in internal medicine at the Hospital of the Good Samaritan in Los Angeles, said her friend and patient, Toni Lieteau, vice president for marketing and community relations for Roseland Hospital.

She founded the Harriet Tubman Free Clinic in Los Angeles, the Feminist Women's Heath Center in Hollywood and the Fredriksted Health Center in St. Croix, in the U.S. Virgin Islands, according to her father-in-law, newspaper columnist Vernon Jarrett.

In 1989 she moved to Chicago to operate a medical practice with her husband, Dr. William Jarrett. He died in 1993.

In 1994, she approached hospital administrators at Roseland and asked if she could open an HIV/AIDS unit that would provide in-patient as well as outpatient care, Krage said. She paid for all the services out of her own pocket for three years. The unit has since received federal funding, he said.

She trained all employees, educated medical personnel on available treatment for HIV/AIDS, worked with community members to assuage their fears of people with HIV/AIDS and started support groups for patients and their families, Lieteau said.

She saw thousands of patients in the HIV/AIDS unit and she also saw patients at private medical offices at 3250 N. Pulaski Rd. and at the Jarrett-Luck Medical Office at 1610 1/2 E. 79th St., Lieteau said.

"Any time I would go to her (79th Street) office, the waiting room was standing room only," Lieteau said. "She would take patients without appointments, so they would hear about her, walk in and wait. She had a genuine interest in her patients. It did not matter if they could pay her or not."

Dr. Constance Shabazz, medical director at Aunt Martha's Youth Services, who also was Dr. Luck's friend, said Dr. Luck had lost a number of close friends and a relative to AIDS. When she saw a need on the South Side, she stepped in to fill it in a way that welcomed all.

"She went into medicine to provide health care to people who otherwise would not be able to access health care," Shabazz said. "She wanted to try to address medical problems and social problems her patients had. She will be sorely missed."

Shabazz said Dr. Luck was to have spoken to a group last Friday about the need for more African-American physicians to provide primary care for patients with HIV/AIDS but did not feel well enough to attend.

"There is going to be a very big void, not only for AIDS patients, but for other patients," Lieteau said. "She was there when they needed her."

She is survived by her mother, Equillia ; a daughter, Khadija Holman; a son, Vernon Jarrett; two brothers, Rodney Luck and Dana Luck; and a granddaughter.[1] 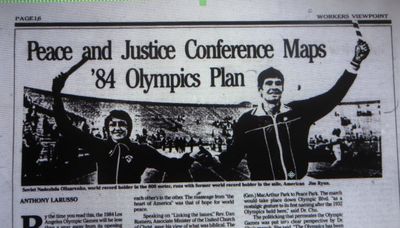 July 9, 1983 Federation For Progress held a planning conference in Los Angeles to prepare for the Olympic Games. Keynote speaker was Bob Swan, founder of Athletes United for Peace.

Also speaking were Rev. Dan Romero, Associate Minister of the United Church of Christ, Morris Knight, Los Angeles County Commission on Human Relations, and Judy Chu, who gave a rundown of what had happened before the conference. Dr. Chu "spoke of US chauvinism and how the press just apes that line"

There was a reassessment of the original goal of 5000,000 people. 100,000 was deemed more realistic. Dr. Chu also summarized the logistics of the planned day.

Dr. Luck said that Los Angeles doesn't want the Olympics to "come into town and rape the community and leave nothing." She put forth the demand for jobs on a permanent basis, not just the Olympics.[3]