Difference between revisions of "Ramsin Canon"

Ramsin Canon is a Chicago activist.

Chicago Democratic Socialists of America has staggered two year terms for its officers, but add in two vacancies among the officer positions and you have nearly a whole new crew selected at the June 17 membership convention. The meeting was held in the historic United Electrical Workers Hall at 37 S. Ashland in Chicago. Clara Alcott was elected female co-chair. Leonard Pierce was elected male co-chair. Hope Payton-Carrillo was elected secretary. Dele Balogun and Ramsin Canon will share the political education officer position (but only one vote). Peg Strobel remains as treasurer, that term ending next June.[1] 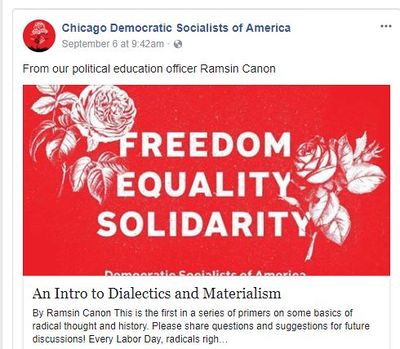