Difference between revisions of "Mariame Kaba"

Mariame Kaba is Founder and Director at Project NIA. From New York, 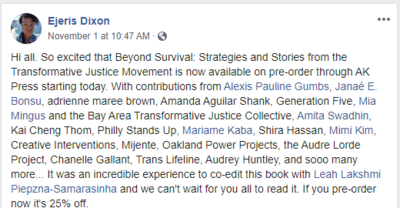 Special guest Rasmea Odeh. Her courage and strength as she faces ongoing persecution by the U.S. Dept. of Justice has made her a symbol of the resistance by women in Palestine and in the struggles for national liberation all over the world.

Other guests included Mariame Kaba, founder of the NIA Project in Chicago, and one of the members of We Charge Genocide, the group that appeared before the UN Committee on Torture to expose the Chicago Police, Sarah Chambers, a member of the bargaining committee of the Chicago Teachers Union (CTU) that led the strike in 2012, and co-chair of the Caucus of Rank and File Educators, leaders in CTU, Kait McIntyre, a leading anti-war activist in Chicago, and a member of Freedom Road Socialist Organization/FightBack!.