Difference between revisions of "Katjoesja Buissink"

According to Franc Stregone on November 21-22 2019, the New Communist Party of Aotearoa (NCPA) held its inaugural congress. The congress marked the end of the 25-year absence of Marxism-Leninism in New Zealand. Held in Wellington, the congress had representatives from the Communist Party of Australia (CPA), the Embassy of Cuba, and the Chinese Academy of Social Sciences (CASS) in attendance. David Matters, Assistant General Secretary of the CPA, led the CPA delegation. 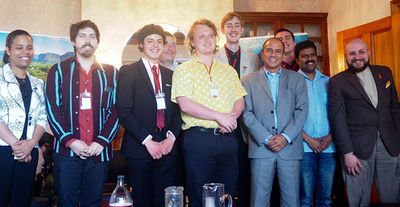 The first day of Congress was marked with speeches, reports, and the election of the Central Committee and its office-bearing positions. Opening the Congress, Katjoesja Buissink, Chair of the Central Committee, remarking on the absence of New Zealand Socialism, noted that the birth of the NCPA did not come “from the void, but as a result of the workers’ struggle both internationally and at home in New Zealand.” Continuing on this topic, Buissink stressed the importance of party unity by highlighting that the NCPA can “learn from both the successes and the ultimate failure of the 20th century New Zealand communist movement. It suffered from unfortunate splits that divided the movement and harmed its ability to form links with the masses. For this reason we take a position of Marxist-Leninist unity. [...] We welcome all Marxist-Leninists into the New Communist Party and seek to resolve all differences through internal, comradely debate. Small differences, particularly those centring on international issues, should not create splits, and we must always prioritise unity in the domestic situation.”

Regarding domestic issues, the CC NCPA, in its work report, presented by Secretary of the Central Committee Jamie Morgan, stressed the importance of the Party’s presence in the union movement stating, “Based on a Party-wide effort guided by Marxism-Leninism, we set on a course of strengthening unions where they do exist, and creating new, class-oriented unions where they do not. The scale on which this is done will naturally expand as the Party does.” In his report, Morgan stated that the NCPA, with its commitment to strengthening pre-existing unions, has met with several union leaders, working closely with them to build union density in the various workplaces.

In creating “new, class-orientated unions,” the NCPA has established their One Class, Two Unions strategy, referring to labour and tenant’s unions, which has seen the development of a new hospitality workers’ union (The Hospo Workers’ Union) and a tenants’ union (Aotearoa Community Union). Morgan highlighted the difference in character between this tenants’ union and those in other countries such as the US and UK stating the “significant difference [in New Zealand]” was that “to a large extent there are not the mega-landlords that exist in the USA or the UK, but a significant number of petty landlords.” Thus, the Aotearoa Community Union (ACU) will be “a mass organisation of working communities” and will “focus on broader issues such as public works, amenities and community life. Therefore, the ACU eventually “should have the ability to develop into essentially [a] proto-Soviet power channelled into the form and name of a union. As it grows, Community Union branches will increasingly function as democratic and popular organs.” Morgan noted the new grounds the NCPA was venturing on stating that this work was “not normally a key point of Marxist-Leninist practice” and that “what revolutionary housing unionism looks like has largely been independently synthesised by New Communist Party cadre.”

The elections were also held on the first day of the Congress which saw Jamie Morgan become Secretary of the Central Committee, Samuel Buitrago Deputy Secretary, and Katjoesja Buissink reelected to Chair of the Central Committee. In the afternoon, NCPA delegates and the CPA delegation visited the new Cuban Ambassador of New Zealand, Edgardo Valdes Lopez, who had arrived in the country just a few days before. The discussions were productive and insightful and marked the continuation of the fruitful relationship between the NCPA and Cuban Party and State. Earlier in the month Morgan, as Deputy Secretary, had visited Havana for an anti-imperialist solidarity conference and met with leaders of the Communist Party of Cuba and its Young Communist League.[1]

August 2018 hundreds of people will rally against the visit of far-right Canadian speakers Lauren Southern and Stefan Molyneux on Friday.

Ten Auckland-based activist groups have banded together for the 'Rally Against Racism', which organiser and Auckland University student Katjoesja Buissink described as "the most organised protest I've ever seen".

She said the groups did not yet know where Southern and Molyneux would be speaking, but the protest would begin at Auckland's Aotea Square.

The venue the duo are speaking at has been kept under wraps and those who have forked out the $99 to attend will only be told the location of the event 24 hours prior.

Buissink said she opposed the Canadian pair speaking in Auckland due to the way they have spoken about minorities in the past.

Sina Brown-Davis, who is the spokesperson for Tamaki Anti-Facist Action (TAFA), said the rally would involve speeches, musical items and cultural performances.

"We just want to display that Auckland is a multicultural city and we appreciate the role of migrants here."

Brown-Davis said the event would be used to show off all the positive aspects of Auckland.

"It's a family-friendly event that's ended up bringing a lot of people together, which has been great. I think positivity is the best counter to hate and division."