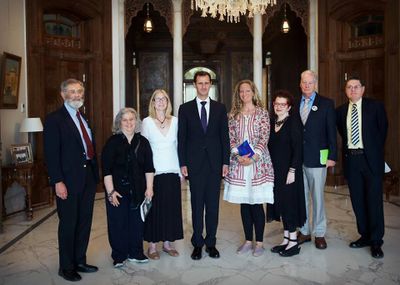 August 9, 2016 — A Peace and Fact-Finding Delegation, organized by the U.S. Peace Council just returned from a week-long visit to Syria. The delegation met with representatives of numerous NGOs, heads of industry, religious leaders and civil society, high-level leaders of the Syrian government, and it held an extended private meeting with President Bashar al Assad.

The delegation’s findings could not be more timely as the world watched the Obama administration escalating violence and bombing in Libya and threatening to escalate its overt military role in Syria. These violent actions take place while the Syrian government and its allies are closing in on the various foreign-funded terrorist groups that have plagued the people of Syria for over 5 years.

Consisting of seven activists representing various peace organizations the Peace Delegation was led jointly by Henry Lowendorf from the executive committee of the USPC and Gerry Condon, Vice President of Veterans for Peace.

“Almost everything we read about Syria in the media is wrong,” said Gerry Condon. “The reality is that the U.S. government is supporting armed extremist groups who are terrorizing the Syrian people and trying to destroy Syria’s secular state.”

“In order to hide that ugly reality and push violent regime change,” continued Condon, “the U.S. is conducting a psychological warfare campaign to demonize Syria’s president, Bashar al Assad. This is a classic tactic that veterans have seen over and over. It is shocking, however, to realize how willingly the media repeat this propaganda, and how many people believe it to be true.”

The Peace delegation spent nearly two hours in dialogue with President Assad, a soft spoken man with a wry sense of humor who thoughtfully answered questions about the current engagement in Aleppo, his perceptions of the bilateral negotiations between the US and Russia, and the revolutionary policy of ending the war through grass roots reconciliation initiatives. Judith Bello reflected, “Syria’s reconciliation plan is a powerful example of a restorative response to divisive forces spreading violence and chaos in a generally tolerant and peaceful country.”

“All members of the Delegation returned convinced that Syria’s sovereignty must be respected, that it up to Syrians to overcome whatever problems exist in their country without interference from the US,” said Henry Lowendorf, co-leader of the delegation. “There exists in Syria a strong nonviolent political opposition who are working both inside and outside the government.”

Members of the Peace Delegation: