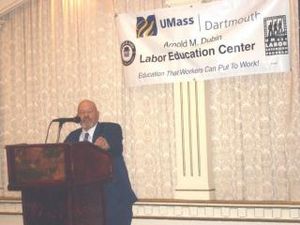 Jose A Soler was, in 2009 Jose Soler a contributing editor and a member of the [1] of the Editorial Collective of Political Affairs, theoretical journal of the Communist Party USA.

He is Director of the Arnold M Dubin Labor Education Center at the University of Massachusetts Dartmouth.

1980s US Peace Council Executive Board

Alice Palmer, editor of the Black Press Review was elected International Organization of Journalists vice president for North America at the organization's 10th Congress, October 20-23 1986, in Prague Czechoslovakia. She also traveled to the Soviet Union and Bulgaria during the same trip[3]. Alice Palmer's IOJ duties were to include co-ordinating the activities of IOJ chapters in the US, Canada, Mexico and the Caribbean.[4].

Other US attendees included Jan Carew of Black Press Institute, Simon Gerson and Jose Soler of the US branch of IOJ and Gwen McKinney and Leila McDowell-Head of the National Alliance of Third World Journalists[5].

The IOJ was a Soviet front operation[6], based in Prague until its expulsion by the Czech government in 1995.

In 1991 Jose A Soler wrote an article for the People's Weekly World, entitled "Our stake in relations with Cuba". Soler was a member of the Puerto Rican Socialist Party and the president of the New Jersey Hands Off Cuba Committee[7]

In the late 2000s, Jose Soler was an assistant editor of University of Minnesota based Marxist journal Nature, Society and Thought[8];.