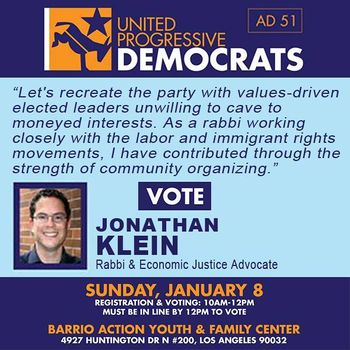 Jonathan Klein is a progressive activist from California. He is also a Delegate, Assembly District 51, California Democratic Party.

Jonathan Klein is a Rabbi. He is married to Tera Klein.

On Facebook, Jonathan Klein explained that his campaign was "...part of a PROGRESSIVE slate in a Democratic Party election ...representing the 51st Assembly District." From his post:

"Help shape the California Democratic party by getting me and my Progressive slate elected!

"I supported Bernie Sanders in the primaries; he advocated for the most vulnerable (and reminded all of us just how much vulnerability there actually is), the focus of my professional work as well. I voted for Hillary Clinton in the general.

"My record of public service speaks for itself, but feel free to ask lots of questions if need be. Whether increasing the minimum wage, abolishing the Death Penalty, passing sensible gun laws, banning plastic bags, or protecting immigrants and Muslims, I've been in the trenches. Now more than ever, the Party needs to reflect these ideals, with a democratic Democratic Party!.

An Interfaith Day of Prophetic Action