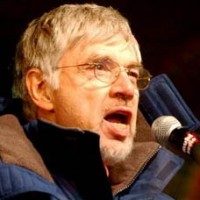 John Catalinotto is a journalist and lecturer at City University of New York, who has represented the International Action Center at tribunals in the U.S.

During the Vietnam War, John Catalinotto was a civilian organizer for the American Serviceman's Union.[1]

Program Schedule for National Conference of Workers World Party: 50 Years in the Struggle for Revolution and Socialism.[3]

Several U.S.based "anti-imperialist and anti-war organizationsuary agreed on a January 17 2012, conference call to hold coordinated protests across the country on Saturday, Feb. 4. The demands will be: “No war, no sanctions, no intervention, no assassinations against Iran.”

The ad-hoc group that took part in the call decided that although there were only two weeks to organize, it would invite anti-war forces around the world to join in, if possible, so that this emergency action could develop into a global day of action.

All agreed on the need to stop U.S. imperialism and/or Israel from launching a military attack on Iran. There was also a consensus that the new sanctions President Barack Obama signed into law on Dec. 31 — with the goal of breaking the Iranian central bank — were themselves an act of war aimed at the Iranian people. The political activists on the call raised the danger of a wider war should fighting break out in or around Iran.

While the organizations involved had varied assessments of the Iranian government, they all saw any intervention from U.S. imperialism in the Southwest Asian country as a threat to the entire region and to peace. Some of the people on the call who are originally from Iran and who were in touch with family and friends there conveyed the Iranian people’s anger at the recent assassination of a young scientist.

There was agreement to make “no assassinations” one of the demands to show solidarity with the Iranian population as well as to condemn the U.S. and its allies for criminal activities against Iran and its people.