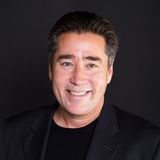 National Vice President for the twelve (12) states that comprise the Midwest region of the League of United Latin American Citizens (LULAC).

Member of the National Executive Board for LULAC. National office is located in Washington DC.

LULAC is the nation’s largest and oldest Hispanic civil rights organization founded in 1929. A membership based organization with over 1,000 councils and 150,000 members throughout the United States. I am responsible for advocacy, awareness, civic engagement and education programs across the region.[2]

He is married to Susan Henry. He works with Nicholas Salazar.

Member of the Communist Party USA since 1982. Brought in by Edna Griffin.[3]

Town Hall Forum on the Unemployment Crisis on Sunday, August 16, at 8:00 PM Eastern. 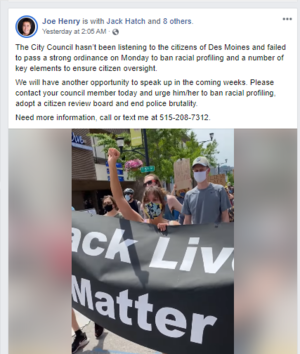 The City Council hasn’t been listening to the citizens of Des Moines and failed to pass a strong ordinance on Monday to ban racial profiling and a number of key elements to ensure citizen oversight.

We will have another opportunity to speak up in the coming weeks. Please contact your council member today and urge him/her to ban racial profiling, adopt a citizen review board and end police brutality. 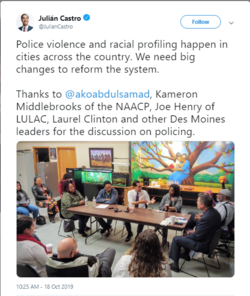 Police violence and racial profiling happen in cities across the country. We need big changes to reform the system.

Thanks to @akoabdulsamad, Ako Abdul Samad of CAIR - Iowa, Kameron Middlebrooks of the NAACP, Joe Henry of LULAC, Laurel Clinton and other Des Moines leaders for the discussion on policing.

As Iowans, we understand the responsibility that comes with being the first in the nation to vote. We want to not only hear where the candidates stand on the issues, but to truly understand how their vision for our country will impact our neighbors and our community. We want to be confident that our nominee has the strength, empathy, passion and experience to deal with the challenges ahead.

Secretary Julian Castro’s vision to make this country the smartest, healthiest, most prosperous, and fairest for all Americans is the real deal.

Growing up in San Antonio, he was raised by a single mother and attended public schools. After graduating from Stanford University and Harvard Law School, Julián embarked on public service and became the youngest city council member in his hometown, and then was elected Mayor. In 2014, President Obama nominated him to be Secretary of Housing and Urban Development.

Julián’s story is the American Dream. Like so many working families across Iowa, Julián wasn’t given a head start, but through hard work and determination both he and his twin brother, Joaquin, now a U.S. Congressman, have been able to accomplish their dreams.

Julián understands that what matters most to voters is showing up. That’s why he’s sat with and listened to residents in a mobile home park in Waukee, has traveled to rural Tabor and Bartlett to hear how ongoing flooding continues to impact these communities, and shown up in deep-red Steve King country to meet voters in Orange City. Secretary Castro has proven time and again that he will be a president for all Americans — including those whose voices are not being heard in Washington today.

Our job this year couldn’t be more critical —- we must choose a candidate who not only has a vision for the future but also the ability to beat Donald Trump. Julián Castro has shown he can do both. And there is simply too much at stake for our country right now to choose anything less.

For us, there is only one candidate, and we hope you’ll join us and support Julian Castro. 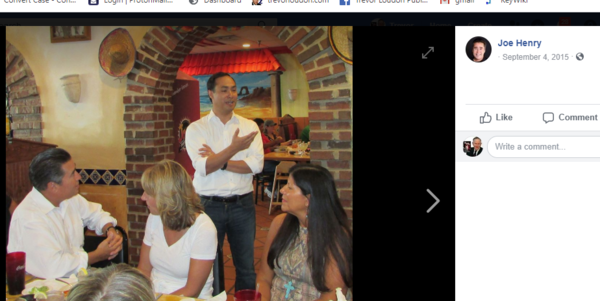 Thank you to all the people who came this morning to provide support for Natalia Miranda.

We were at the Polk County Criminal Court Building to observe the legal case against the assailant.

Unfortunately, charges were not issued this morning due to a plea from the defense attorney, claiming mental incompetence of the accused. We hope to be back in court in the next two weeks to demand justice immediately. — with Bonnie Louise Brown, Nataly Espinoza, Erika Macias, Tar Macias, Michael Reyes and Joe Diaz at Polk County Criminal Courts.

Chelsea Chism-Vargas is a first generation Peruvian-American born and raised in the 4th Ward. As a lifetime southsider, Chelsea credits her community for providing her with the resources, experiences, and guidance that paved the way for her leadership. She is excited to gain the support from her community as she begins her c... See More — with Erika Macias, Joe Henry, Daniel Garza, Susan Henry, Chelsea Chism-Vargas and Jeanina Juanita Messerly. 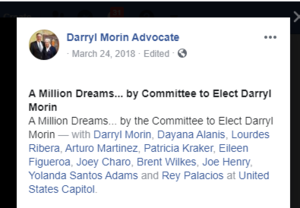 A Million Dreams... by Committee to Elect Darryl Morin

As state director, I work with members on issues that impact the Latino Community specifically on civil rights and education. Work within the State is coordinated with the national office. LULAC is the oldest Latino civil rights organization in the United States, founded in 1929.[7]

In 2012, as state director for LULAC, Joe Henry worked with the ACLU to take on a 2-year battle against the Iowa Secretary of State who attempted to suppress the vote amongst Latinos and other minorities. He also led a successful 5-year statewide voter outreach effort that culminated into tens of thousands of additional registered Latino Voters, a first ever data base of identified registered Latino Voters, and a record turnout of Latinos in the 2016 Iowa Presidential Caucuses.[8]

The full list of names of Sanders' 2015 Iowa Latino Leadership Committee can be found below:

He serves on the Communist Party USA's Political Action Committee with Joelle Fishman.[9]

In 2014 Joe Henry was included on a list of "50 of Iowa's makers and shakers for the Democratic presidential caucuses".

Henry, 58, is the state director for the League of United Latin American Citizens and a Des Moines real estate agent with lots of connections. He is sought after for advice on a niche market in Iowa politics: Hispanic voters.[10]

Business owner Joe Gatto defeated real estate agent and longtime community activist Joe Henry in yesterday’s special election to represent Ward 4 on the Des Moines City Council. Unofficial results from the Polk County Auditor show that Gatto won by 1,687 votes to 1,283 (57 percent to 42 percent). Ward 4 covers most of the southeast side of Des Moines. The City Council seat became open when Brian Meyer won a special election for an Iowa House seat last October. Henry had begun campaigning for that Iowa House race but stepped aside once Meyer made his intentions known last August[11]

Realtor in the Greater Des Moines Area. Residential, land and commercial agent. I can help you with your real estate needs.[12] 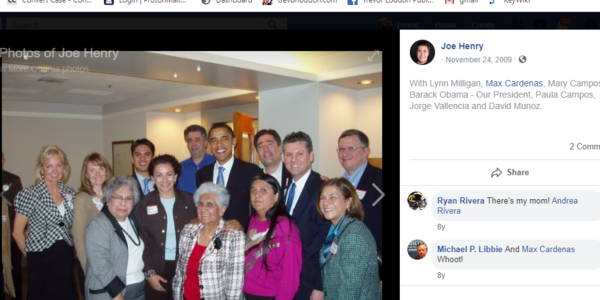 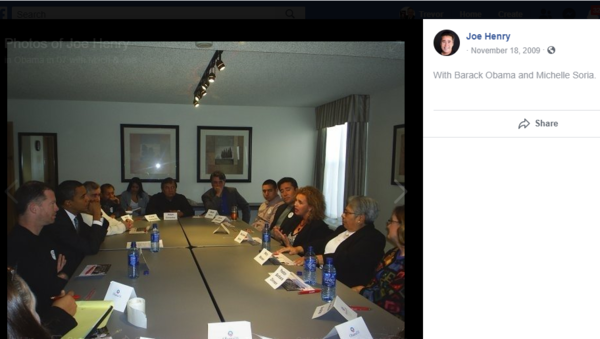 Executive Director for Tobacco Free Iowa that was funded by a national grant for the purpose of educating the public on the dangers of second hand smoke.[14]

Field organizing for non profit to educate the public and the presidential candidates about national budget. [16] priorities.

The conference will be streamed from Chicago to regional meetings in New Haven, Los Angeles, and Orlando. Whether you’re on the East Coast, West Coast, in the MIdwest or the South, you’ll be able to participate.[18]

Hundreds gathered June 2019 to celebrate the 100th anniversary of the Communist Party USA (CPUSA). The party’s 31st National Convention was held at the University of Illinois campus in Chicago and ran for three consecutive days. The event featured a variety of speakers, such as Samaria Rice, the mother of Tamir Rice, who was slain by Cleveland police in 2014, Chicago activist Pepe Lozano, CPUSA national chair John Bachtell.

In the first of several workshops on Friday, titled “Unity Against Special Oppression; For equality and democracy,” focused on the ways in which communities can resist the racist and divisive policies implemented by the Trump administration and work together to build stronger communities. Featured speakers on the panel, included party members Joe Henry, Cori Marshall, and UNITE HERE Chief Steward Barbara Vereen.

Discussion topics ranged from protecting immigrant communities and the denial of reproductive rights to increasing voter turnout. Joe Henry, who serves as the National Vice President of the League of United Latin American Citizens (LULAC) for the 12 states that comprise the Midwest region, focused on the numerous threats currently facing immigrants. “We need to push for legal status of all immigrants,” he asserted, “not just DACA recipients.”

Panelist speaker Barbara Vereen, emphasized the importance of intentionally uplifting women in the movement. “Be inclusive to the point where it makes you uncomfortable,” Vereen said, highlighting her experiences as a Black woman in leftist spaces.

Vereen also encouraged convention delegates to reframe the way they think about diversity and inclusion, noting that Black women need to be put in leadership positions—not just included in discussions. “Hold outside organizations accountable, but let’s also hold ourselves accountable.” Her remarks were met with applause.[19]

Working for Ron Carey from 1992 - 1999 in Washington DC was truly an amazing experience. — at Union Station, Washington D.C.

History - Back in 1984, we did a special event for our dear friends, Edna Griffin & Stanley Griffin, to raise money for social justice work.

It was a great time for activism and discussion on how to mobilize our communities of color. Edna always provided insight and an in depth analysis on confronting racism and how she fought to make our city a better place for all people.

Shortly afterwards, we went to city hall to demand equal treatment in the hiring of applicants for police and fire fighters, especially from the Latino and African American Communities.

Unfortunately, we are still fighting to make city hall and the 1,804 positions in city government more accessible to people of color.

When we were in Chicago for a union conference — with Jacob Joseph Bales-Henry, Tim Yeager, David Clark, Elaine Smith, Zachary Bales-Henry, Bamshad Mobasher and Bjorn Stevens.