Difference between revisions of "Jim Hightower" 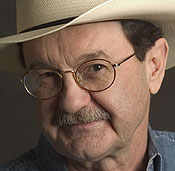 Jim Hightower is a national radio commentator, writer, public speaker, and author of Swim Against The Current: Even A Dead Fish Can Go With The Flow. Hightower has spent three decades "battling the Powers That Be on behalf of the Powers That Ought to Be--consumers, working families, environmentalists, small businesses, and just-plain folks". Twice elected Texas Agriculture Commissioner, Hightower believes that the true political spectrum is not right to left but top to bottom, and he has become a leading national voice for the "80 percent of the public who no longer find themselves within shouting distance of the Washington and Wall Street powers at the top."

In 1979 Jim Hightower of Texas Observer served on the steering committee of the Institute for Policy Studies initiated Conference on Alternative State and Local Public Policies. [1]

In 1996 Jim Hightower, Hightower Radio was one of the original 130 founders of Campaign for America's Future.[2]

Back to Basics conference

A Back to Basics conference on the future of the American Left, was held in Chicago October 9-11, 1998. Speakers included: Sen. Paul Wellstone, Rep. Bernie Sanders, Rep. Cynthia McKinney, Barbara Dudley, Quentin Young and Jim Hightower. The conference was sponsored by Sponsored by In These Times[3].

In 2009 Jim Hightower, Radio Commentator was listed as a signer of the Progressives for Obama website.[5]

In 2009 Jim Hightower was listed as a member of the Advisory Board[6] of Wellstone Action, a Minnesota based organization based on the political legacy[7] of that state’s late ‘progressive” Senator Paul Wellstone.

Jim Hightower serves on the Advisory Board of Progressive Democrats of America.[8]

Hightower is a board member of the Public Citizen Foundation.