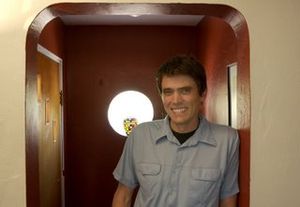 He is a native Tucsonan who co-founded a non-profit video production company and produced documentaries before entering law school.[1]

His skills in that area enable us to produce in-house videos for use in settlement conferences and trials.

I hope my son will grow up happy and healthy. I hope he will inherit a world where neither his country nor any other terrorizes and oppresses poor people in a horrific search for riches. I hope we can stop the brutal exploitation of working people in the US and around the world. I hope we will have a world where people have to decide between health care, food and shelter.I dream of peace.

Jeff Imig co-founded Pan Left Productions with Lisa Wise in 1994 when they were still in film school. Since then, he co-directed and co-produced Elephants and Grass, Solidarity is Stronger than Granite and Unity Crosses Borders/Unidos Cruzaremos las Fronteras. He also produced I Was a Teenage Prostitute and Border Crossings. His last project was Immokalee about the struggle for human rights in the tomato picking fields of South Florida.

In 1995 the Communist Party USA newspaper People's Weekly World, published a "May Day salute" to the "heroes in the class war zone". More than 100 unionists/activists endorsed the call, mostly known affiliates, or members of the Communist Party.

Jeff Imag (Imig), Tucson Jobs with Justice, was one of those listed[4].

On May 1 2009, this statement appeared in the Communist Party USA paper Peoples World;[5]

Arizona’s progressive community extends May Day and Cinco de Mayo greetings to all our friends across the country. We commit ourselves to join the struggle for jobs, equality, national health care, a fair immigration policy, and for peace and justice in the Middle East. Let’s make this planet a good place to live for all its inhabitants.

Please plan to attend our next Jobs with Justice meeting.

1. Labor solidarity: Communication Workers of America at American Airlines, learn about the organizing campaign from

Lee Ortega, organizer and how we can help.

2. The fight to save our Cherrybell Post Office, review of rally, march and hearing to save this processing plant and solidarity with the American Postal Workers Union, Tucson Area Local