Difference between revisions of "Jackson Cosko" 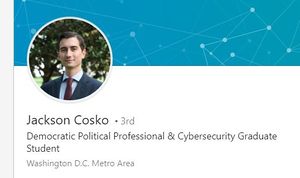 Jackson Cosko most recently worked as an unpaid intern for Rep. Sheila Jackson Lee, D-Texas. He previously worked with Sen. Maggie Hassan, D-N.H., and former Democratic Sen. Barbara Boxer of California. He also worked or interned with the office of Sen. Dianne Feinstein, D-Calif., the ranking member of the Senate Judiciary Committee, as well as with at least one other unnamed lawmaker. A LinkedIn page with Cosko's name on it describes him as a "Democratic Political Professional & Cybersecurity Graduate Student."

Leading up to the 2016 election, Jackson Cosko claims on his LinkedIn page to have been a "lead field organizer" for Generation Forward PAC.[1]

In October 2018, Jackson Cosko was charged "with making public restricted personal information, witness tampering, threats in interstate communication, unauthorized access of a government computer, identity theft, second-degree burglary and unlawful entry." According to an article posted at Fox News, "Police added that the investigation was continuing and more charges could be filed."[2]